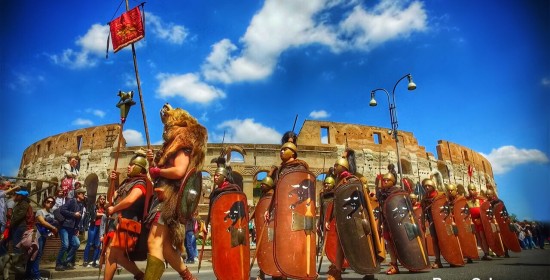 Buon giorno and welcome to Stefano’s RomeCabs, Rome’s leading company for private day tours and transfers. Every year on April 21, Italy celebrates a very special birthday: The Birthday of the founding of Rome!

The extensive history of Rome is quite fascinating and discovered through many layers of archaeological digs…however, the legends surrounding the birth of Rome are epic stories shrouded in mystery and handed down by the ancient Romans eager to explain the origins and history of their city.

The date of founding of Rome was settled as April 21, 753 BC by the Roman antiquarian Titus Pomponius Atticus, and later adopted by the Roman scholar Marcus Terentius Varro in 1st century BC.

THE THE BIRTH OF ROME:  BETWEEN HISTORY AND LEGENDS

The most common legend claims that Trojan hero Aeneas arrived on the Italian peninsula in the area southwest of Rome after surviving the fallen city of Troy.  Aeneas’ son, Ascanius eventually founded Alba Longa ( the ancient city of Latium) and the line of the legendary Alban kings of Latium (a small region near Rome where independent tribes of Latins or Latini resided).

Toward the end of this dynasty around 8th century BC , Latium was ruled by King Procas who had two sons: Numitor and Amulius. Numitor became king after the father’s death, however his brother Amulius ousted Numitor and imprisoned him in order to take control of the throne. He also forced Numitor’s daughter, Rhea Silvia to become a Vestal Virgin (a virgin consecrated to the goddess Vesta, vowed to chastity and in charge of a perpetually burning sacred fire).

Here where mythology takes over to explain the legendary birth of Romulus, the founder of the city of Rome (that later became a Roman kingdom, a Republic, and an Empire)

It is said the pagan god of war Mars was smitten with Rhea Silvia and impregnated her with twins. 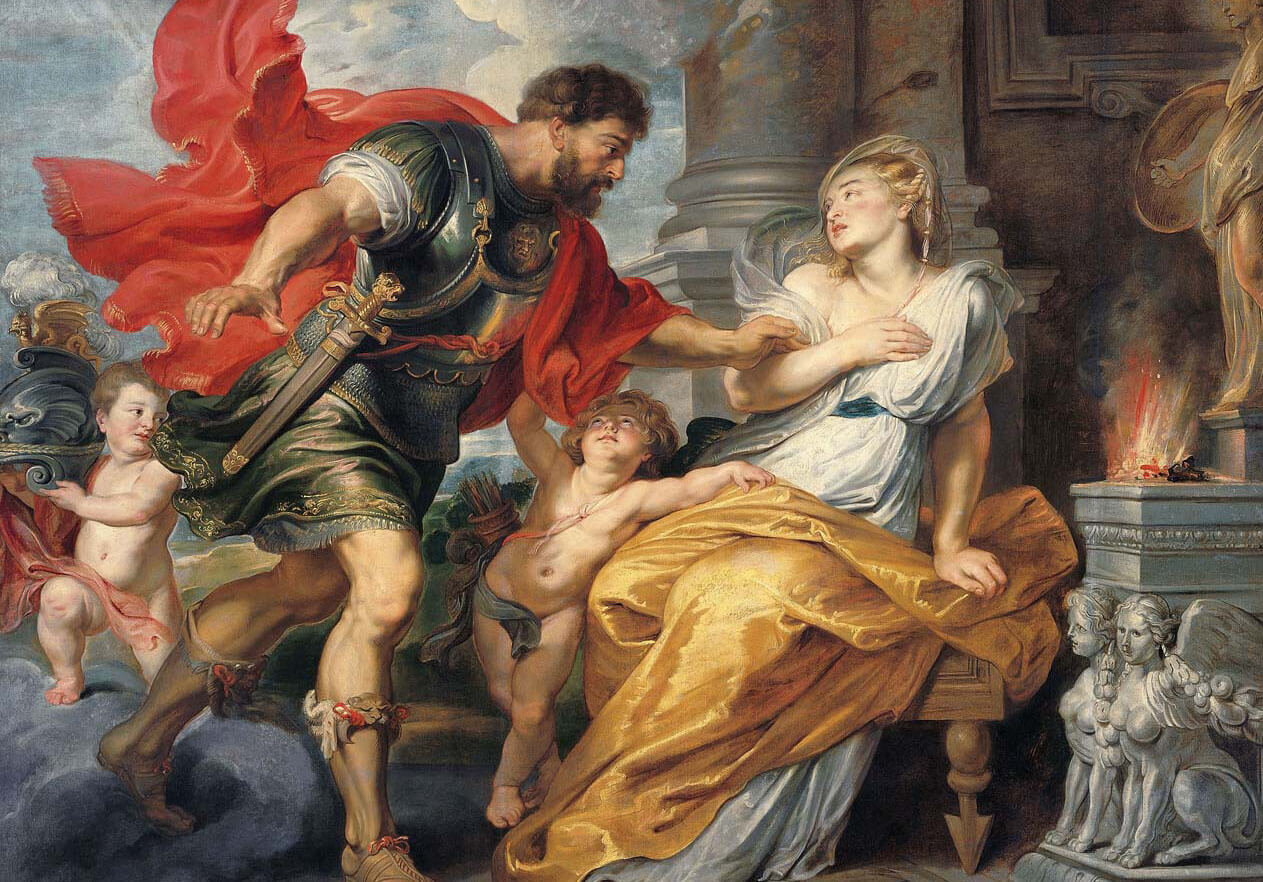 This demi-divine pregnancy came with a prophecy that the offspring will overthrow their great uncle King Amulius.

As with many mythological figures and demigods, the twins who were supposedly born around 771 BC were bigger and more beautiful than average mortal babies. They were ordered to be killed by the king, but instead were abandoned at birth and set afloat on Tiber River in a basket by sympathetic servants who disobeyed the orders. 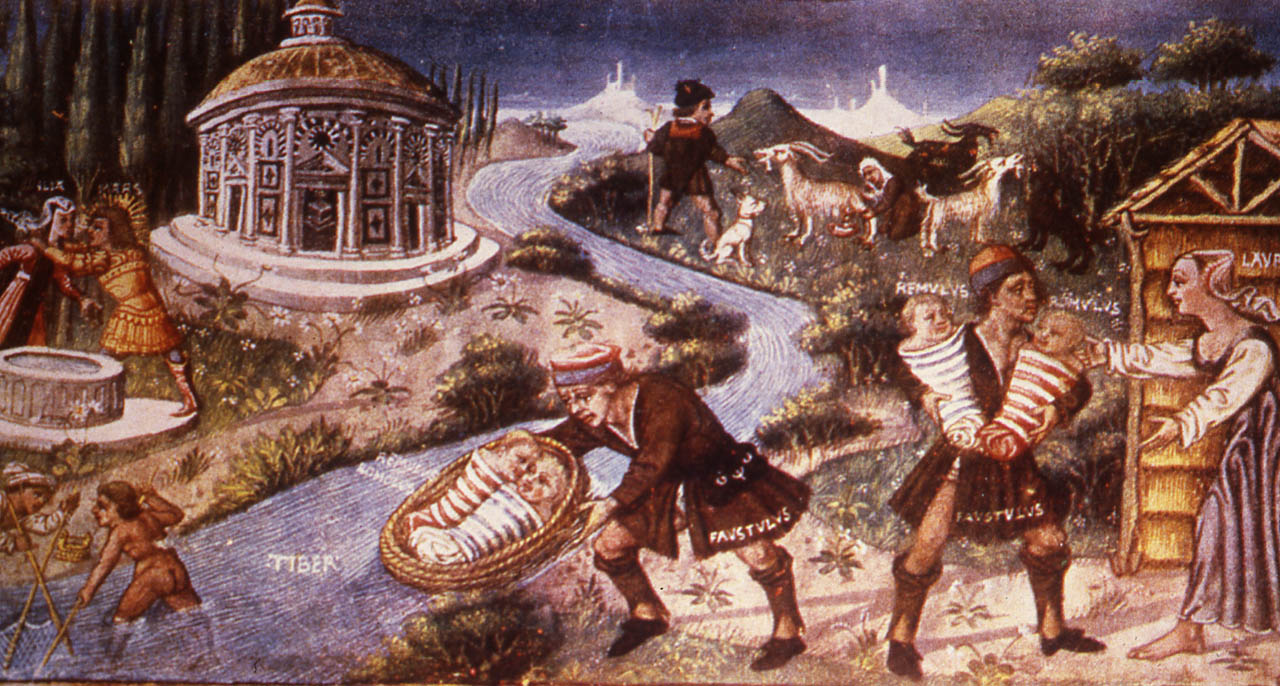 Legend has it (and demonstrated in the symbol of Rome) that the twins Remus and Romulus were nurtured by a she-wolf in a cave now known as the Lupercal (located at the foot of the south side of Palatine Hill between the Temple of Apollo Palatinus and Basilica di Sant’Anastasia al Palatino) until they were found by a shepherd named Faustulus who took them as his sons and raised them with his wife Acca Larentia. 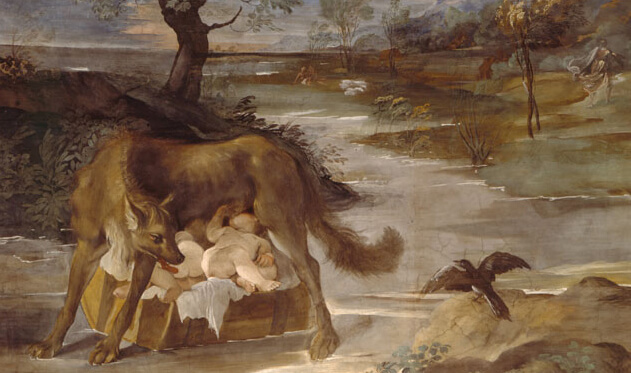 Prophecy was fulfilled when indeed when Remus and Romulus, upon reaching adulthood, discovered their true identity. They killed Amulius and reinstated the rightful king of Alba, their grandfather Numitor. 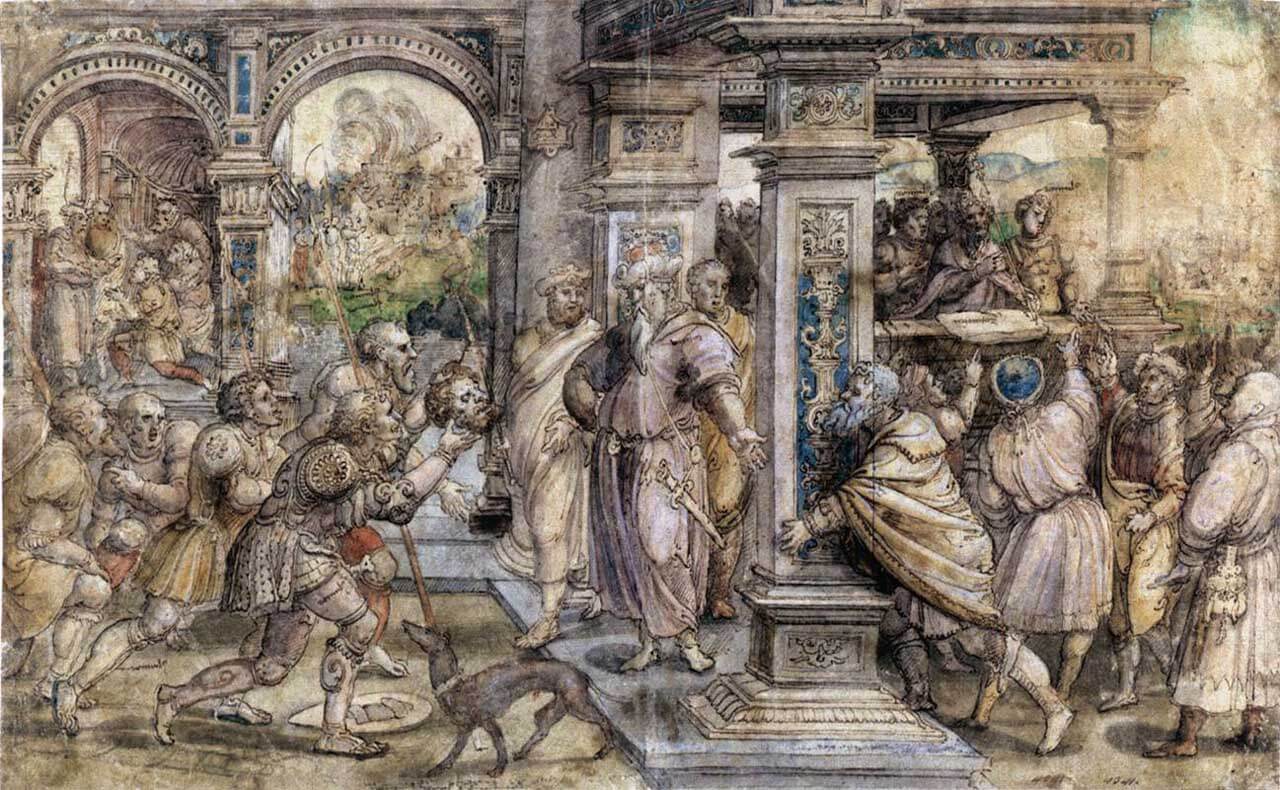 The brothers then decided to establish a city in the area of the seven hills, but due to a quarrel regarding on which hill to build their city (Romulus favored Palatine hill and Remus favored Aventine hill), the two brothers fought and in a fit of rage Romulus ultimately killed his brother.  Romulus founded his city of Rome and became its first king.

According to legend, Romulus plowed a furrow around  Palatine Hill in order to mark the boundaries of his new city.  He ruled Rome for a long time as a great general and demigod who lead the Romans to victorious battles against their rivals, and when he died under mysterious circumstances, many Romans believed he ascended as god Quirinus.

Following Romulus 6 more kings ruled Rome, the last 3 having been Etruscan when the Romans overthrew the last Etruscan King in approximately 509 BC and established a Republic.

Recent archeological discoveries on Palatine Hill, showed evidence of ancient fortification walls on the north slope that dated back to mid 8th century BC.

The day that the ancient Romans believed Rome was founded was April 21, the day of the festival sacred to Pales – the goddess of shepherds.  Various scholars claimed different dates based on several calculations, but the most accepted date was 753 BC according to the Roman antiquarian Titus Pomponius Atticus, and later adopted by Marcus Terentius Varro in 1st century BC.

The birthday of Rome is celebrated throughout Rome’s historic center with live band performances held in many popular squares, special exhibitions, street performers,  free entry to many monuments and museums, fireworks, and cinematic light shows in the ancient forums.

The highlight of the birthday festivity is the historic parade with over a thousand re-enactors from historic groups from all over Italy (and Europe) in authentic ancient Roman costumes – as well as the pre-Roman Etruscans, and barbarians – that represent different eras of Rome’s ancient history.

The Birthday of Rome parade generally starts in Circus Maximus at 10 AM and it proceeds along Piazza Venezia to Via dei Fori Imperiali, around the Colosseum, and back to Circus Maximus.

In the afternoon following the Rome Birthday parade, historical battle re-enactments take place for the crowds’ entertainment in the Circus Maximus where tents are set up with refreshments and Ancient Roman exhibition and memorabilia. 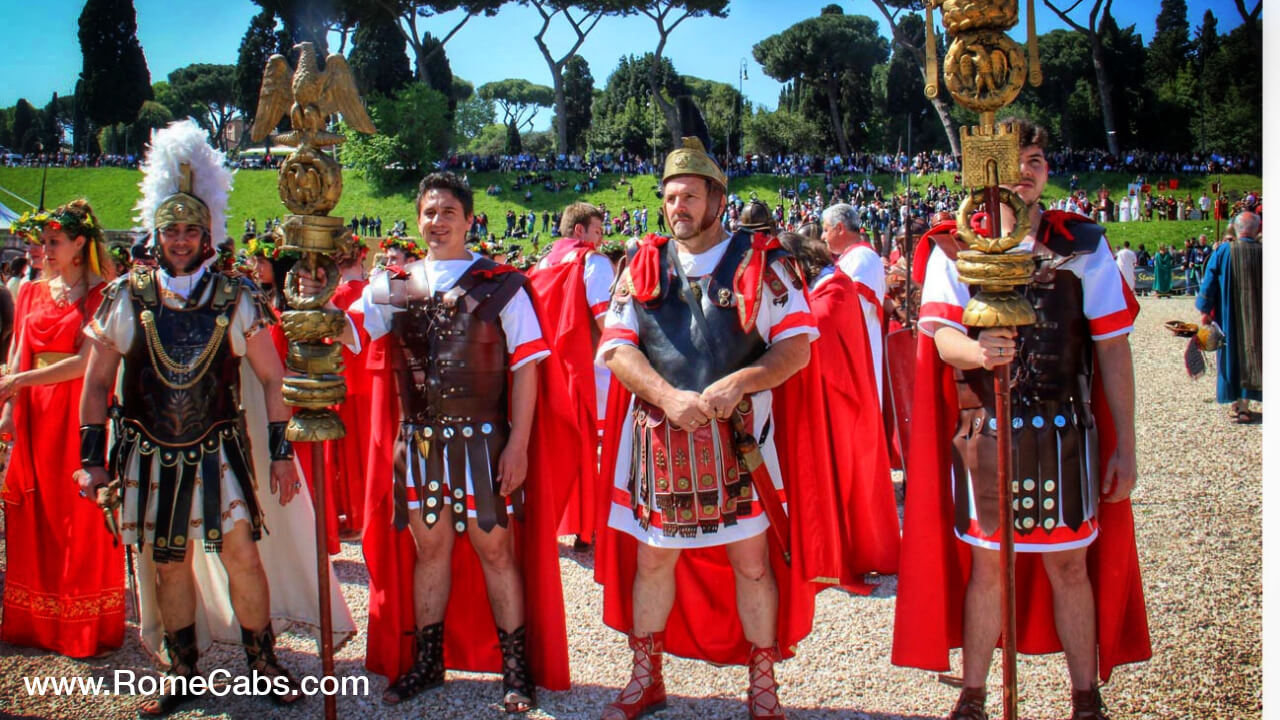 At night there may be fireworks, light shows, and cinematic projections add a more modern twist to the ancient beginnings of the birthday of Rome, and can be enjoyed in the Imperial Forums. Visual displays vary from year to year in theme and style. 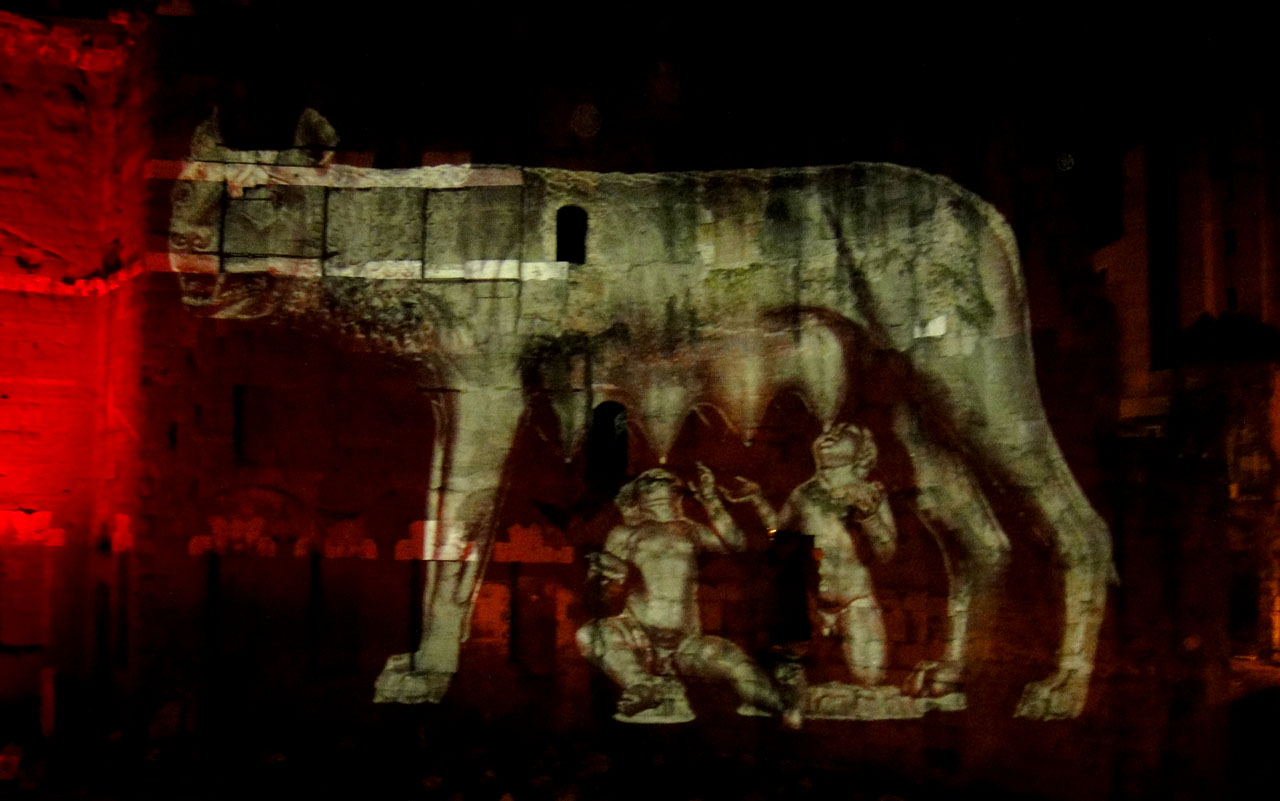 For historical re-enactments and parade schedule, below is a link to the program (in Italian), provided by the group that sponsors the historic parade: Gruppo Storico Romano.

According to Roman mythology, Palatine Hill was the location of the Lupercal where Romulus and Remus were suckled by the legendary she-wolf.  This is the hill on which Romulus built his city of Rome and where the original Romans have lived.

Excavations have revealed that people have settled here as far back as 10th century BC during the Bronze Age that predates the alleged founding of Rome.

Another interesting discovery that you can see for yourself is the Capane di Romolo (the Hut of Rumulus). Located on the south-western corner of Palatine Hill where it slopes towards Circus Maximus, it’s considered the reputed dwelling place of Romulus. It was a typical single room peasant hut with straw roof and wattle and daub walls traditionally built by the Latins. 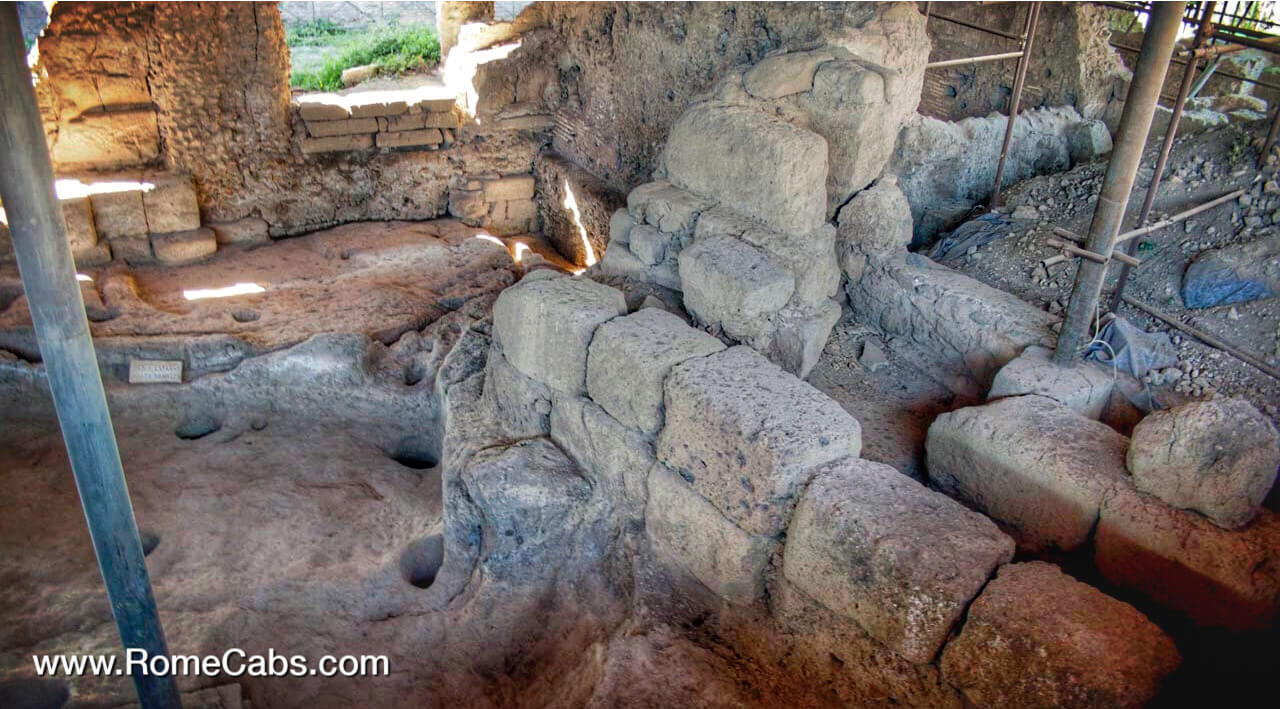 Later on in history, Palatine Hill was Rome’s most posh area where the most affluent Romans and royalty had their “palatial” villas (the words palace and palatial is believed to have derived from Palatine Hill). 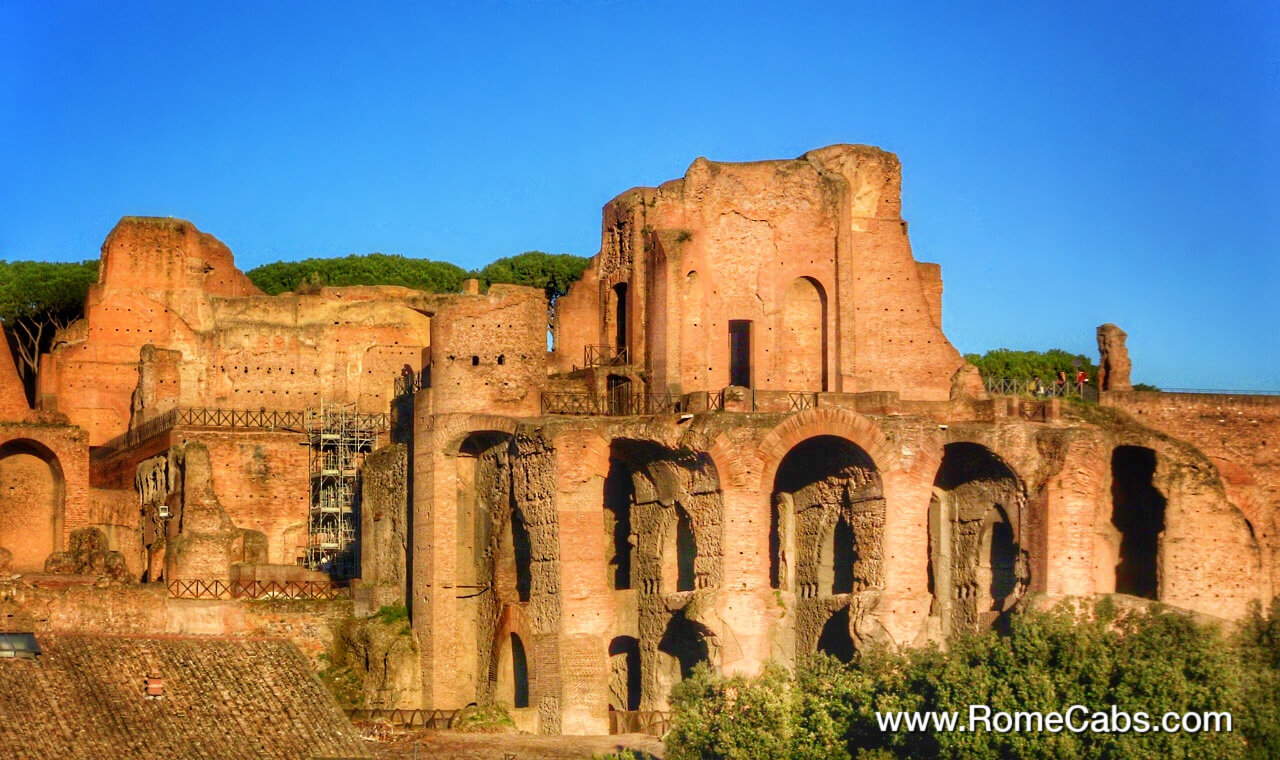 Enjoy a stroll through the ruins of the once grand villas and palaces of Ancient Rome’s most elite residents. 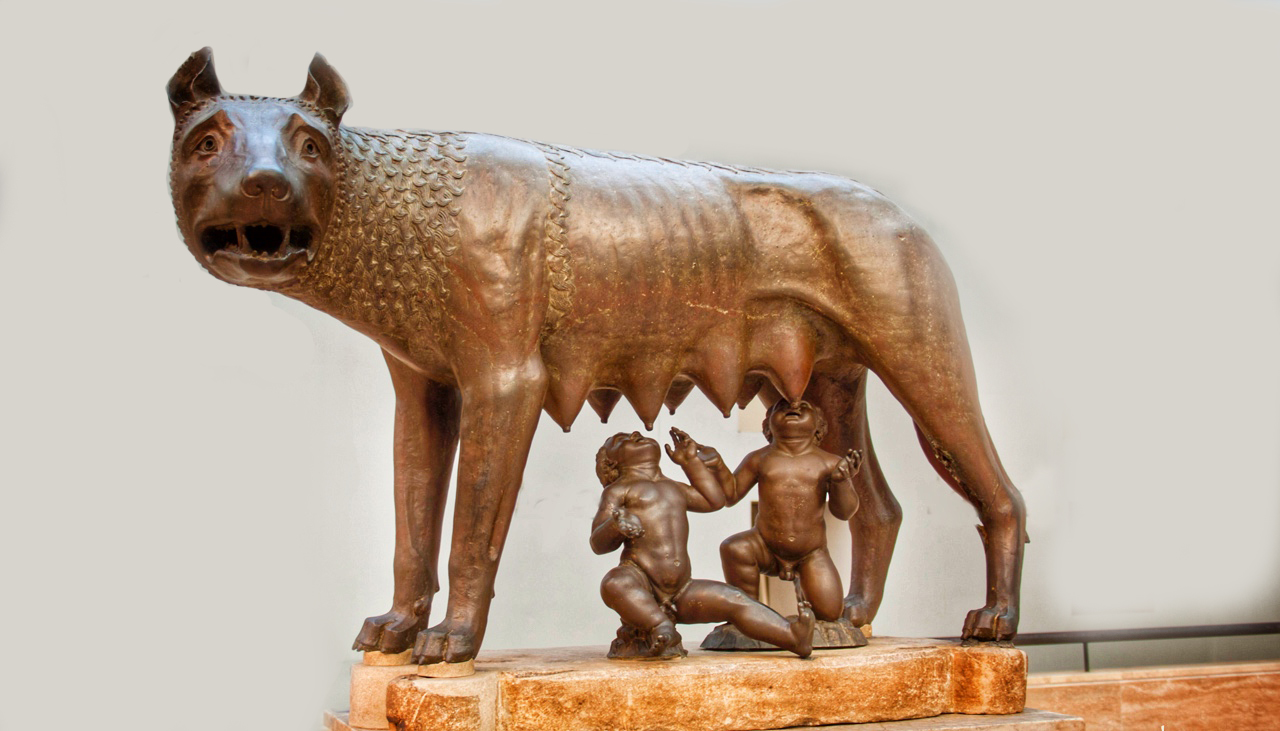 Here you can see the “Capitoline She-Wolf” (Lupa Capitolina), a hollow-cast bronze sculpture depicting the she wolf standing in a tense watchful pose while the infants Remus and Romulus are suckling below.

Painting by Peter Paul Rubens: Faustus discovers Romulus and Remus with the she-wolf and a woodpecker. To the side, their mother Rhea Silvia and river god Tiberius are witnessing the moment.

Altar to Mars and Venus

A 2nd century AD marble sacrificial altar that includes carvings of the legend Remus and Romulus, their adoptive father Faustulus and the river god Tiberius. 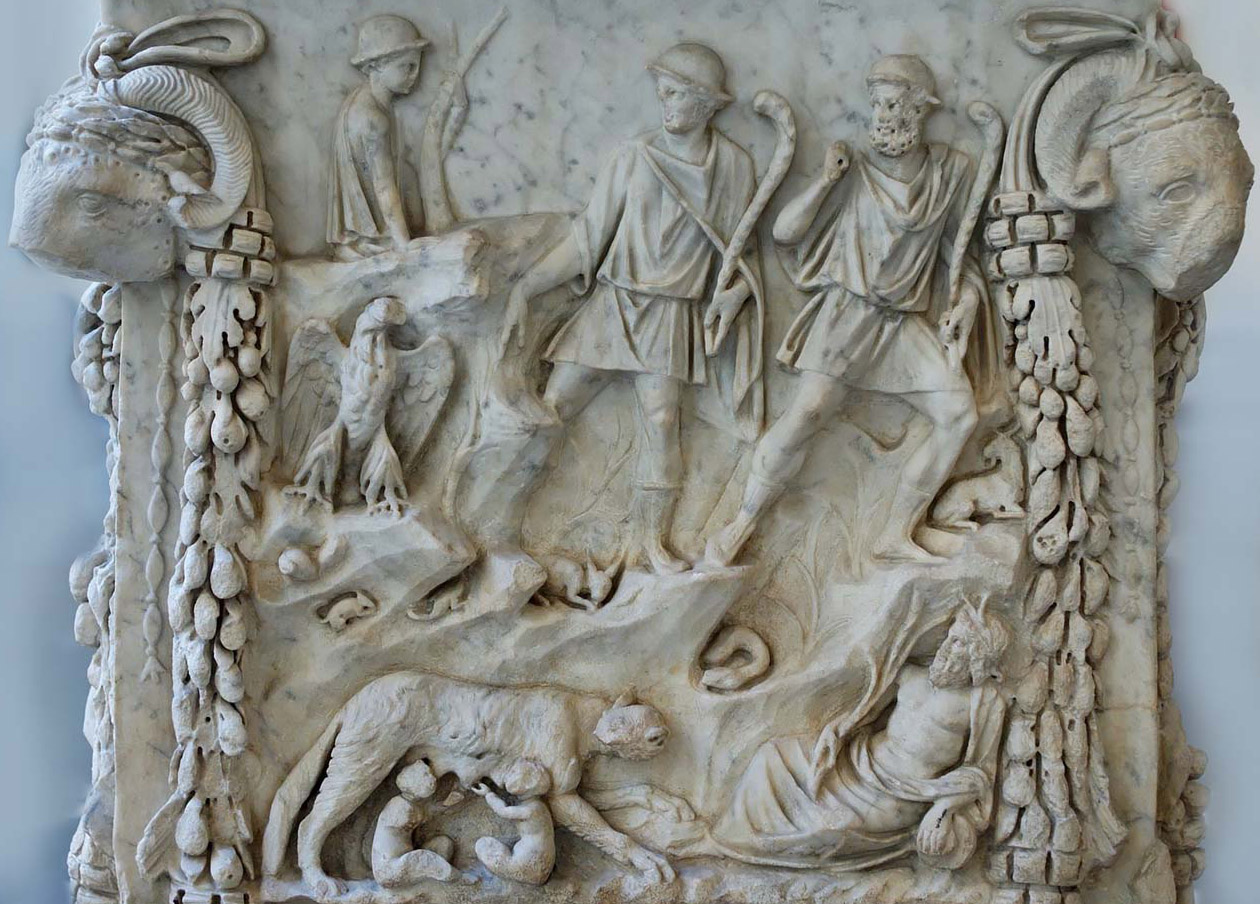 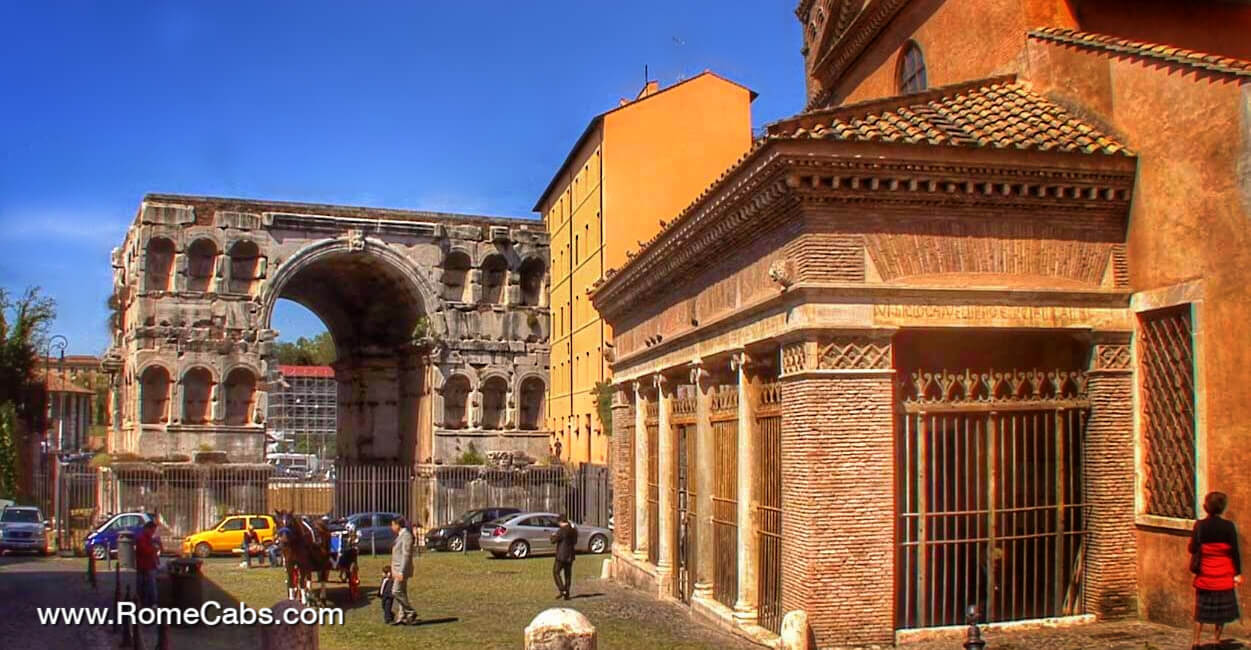 This 7th century church located near the Arch of Janus, was once a marshy area formed by a stream that crossed the valley of the Roman Forum and spilled into the nearby Tiber River.  Velabrum was the ancient name of this low valley in Rome.

According to legend, it was here that Romulus and Remus came ashore after they were sent adrift on the Tiber River in a basket in order to escape death. Mythology credits Tiberius, the river god, for deposing the infants safely ashore.

While you’re in Rome…. VISITOR TIPS

*  With your Palatine Hill tickets, you can also visit the Colosseum and the Roman Forum.

*  At the Capitoline Hill, catch a picturesque glimpse of the Roman Forum below with the Palatine hill and Colosseum in the background.

*   If you are in Rome on the FIRST Sunday of the Month, all the above mentioned sites are FREE to visit.

*  If you visit San Giorgio in Velabro, walk over to Piazza della Bocca della Verita where you’ll find Byzantine Santa Maria in Cosmedin Church with the famous “Mouth of Truth”.

Across the street are the ancient Temple of Hercules Victor, the Temple of Portunus,  and the Great Altar of Hercules. This square was once the Forum Boarum – the ancient Roman cattle market, and was also the site of the first gladiatorial contest in Rome in 264 BC as part of a funerary ritual.

For more information on Stefano’s RomeCabs and our Transfers and Tours, please visit our website below. We look forward to welcoming you to our beautiful Eternal City of Rome!