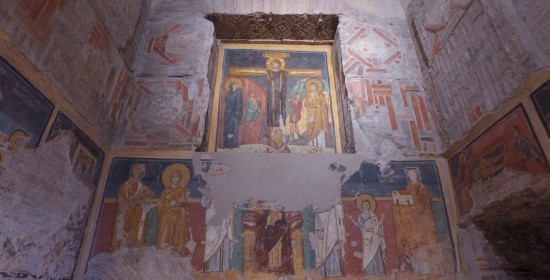 At the back of the Temple of Castor and Pollux (easily recognized by the 3 columns that still remained standing) is  Santa Maria Antiqua (Ancient Church of Saint Mary), a 6th century Roman Catholic Marian church built at the foot of Palatine Hill inside the Roman Forum during the reign of Emperor Justin II (565 – 578).

Just when you thought you saw all there is to see at the Roman Forum in Rome, from March 2016 to September 11, 2016 visitors had the unique opportunity to visit one of the earliest surviving ancient Byzantine churches in Rome that is only open to the public for a limited time and not be missed!

The church itself was converted from an Ancient 1st Century Roman structure built by Emperor Domitian that served as a zig zagged imperial ramp connecting the hilltop palaces on Palatine with the Roman Forum below.  A portion of this ramp was accessible from within the church through a high ceiling passageway that leads you upward to the outdoor ramp and to a terrace for a gorgeous view of the Roman Forum.

Eventually this Roman structure was transformed into a guard chamber that protected this monumental access to the Palatine Hill. Brick pillars were erected to support a roof covering the once open atrium, and its opposing walls were adorned with Christian theme murals.

Shortly after, the guard chamber itself was converted into a church that today serves a remarkable example of an early Christian sanctuary built within an ancient Roman pagan structure.  The existing brick pillars were replaced with 4 granite columns, the porticos were adapted into 2 side aisles, and an apse was carved out of a thick brick wall.

The interior walls were magnificently decorated with mosaics, polychrome marble, and richly colored frescoes that spanned across 3 centuries and 7 superimposed layers as newer frescoes were painted on top of older frescos creating a palimpsest that gives us a unique glimpse into the development of early Medieval and Byzantine art.

In the 9th century, Santa Maria Antiqua Church was abandoned and buried by rubble following an earthquake that sealed the building for more than 1,000 years until it was rediscovered in 1900.

Although heavily damaged by the earthquake, thanks decades of painstaking restorations to restore this ancient sanctuary, we can admire stunning and colorful ancient frescoes depicting the Virgin Mary with infant Jesus, saints and martyrs adorn the walls of the sanctuary.

The fact that this church was sealed for a thousand years, it escaped the 8-9th century Byzantine iconoclasm, and alterations during the Baroque or Counter-Reformation periods when churches in Rome were updated.

You can view digital renditions of the church in its original state on a wide screen displayed inside the church near the mosaic display.

Also exhibited in the Chapel of Theodotus, Chapel of the Medical Saints, and presbytery were digital projections on the walls depicting how the original frescoes appeared a thousand years ago when the church was in use. The awe inspiring digital exhibition inside the Chapel of Theodotus is not to be missed! Descriptions in Italian and English accompany the projections for a visually spectacular and informative experience.

To give you an idea of this grandiose imperial vestibule, visitors exited the church through a side doorway and walk through the tall covered passageway onto the zigzagged ramp leads up toward Palatine Hill and to a lovely terrace for a stunning view of the Roman Forum below.

For 30 years between 1980 to 2012 Santa Maria Antiqua was closed to the public and only permitted limited access to scholars who applied for a special visit.

An extensive conservation project was carried out by the Italian government ( Archaeological Superintendency of Rome) and the World Monuments Fund at a cost of about  2.7 million Euros.  The church was open for public visitors from March 17 to September 11, 2016.

Thank you very much for reading our Santa Maria Antiqua - the Sistine Chapel of Early Medieval Era blog.

For information on our Day Tours, Shore Excursions and Transfers, please visit our RomeCabs website.

We look forward to seeing you soon in Rome!