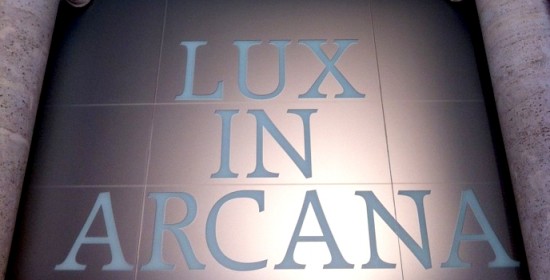 Lux in Arcana: The Vatican Secret Archives Reveals Itself

This was the latest museum exhibition in Rome that has taken the world by surprise, marking the 400th anniversary of the Vatican Secret Archives.

“Lux in Arcana” means “Light in the Archives”, shedding light on 1,200 years of history from 8th century AD to today, in 100 original documents from ancient parchments, manuscripts and codices, to popes, emperors, conclaves, excommunications, heresies, crusades, Galileo, Michelangelo, Bernini, Martin Luther, and mysterious secret codes.This is the first time in history, and perhaps the only time, documents of historic and scientific importance such as these have been made available to the public at large.

What is the Vatican Secret Archives?

The Vatican Secret Archives was founded in 1642 by Pope Paul V.  The “private” archives are therefore, under the sole custody of the Pope.

For 4 long centuries the Vatican has kept its deeds and documents secret from the public, therefore we could only imagine and dream about the secrets hidden inside the library affectionately nicknamed “the bunker” with bookshelves that expand to nearly 53 miles to include 650 record groups and 30,000 volumes containing millions of of documents accumulated by the Church over the centuries.

Because of the vast wealth of information inside the Vatican Secret Archives, it’s considered one of the world’s most significant historical research centers where the lucky scholars with the proper credentials and permission can obtain the coveted limited access these priceless secrets.

Fortunately for Rome’s visitors, from March 1 until September 9, 2012, you too could have been privy to 100 carefully selected original documents beautifully exhibited throughout 11 galleries inside the Capitoline Museum in Rome.

Elegant displays, some digitally enhanced adding color, light, drama and movement (especially the burning fire digitally displayed against long panels inside the room that features the summary of Giordano Bruno’s trial, who was ultimately burned at the stake in Campo dei Fiori in 1600) added the element of sophistication and technology that compliments these ancient texts. Detailed information is provided on screens next to  each document on display.

Here are a few of the documents that were on display:

Michelangelo request of payment for work on St Peter’s Basilica

A letter from Michelangelo Buonarroti  to the bishop of Cesena requesting payment for his workers on St Peter Basilica after all work was halted when Pope Paul III passed away.

Being the superintendent of the construction of the basilica, he was responsible for the wages of all the carpenters, masons, and craftsmen. In his brief letter to the bishop, the ever dramatic Michelangelo, lamented that his workers remained at the construction site “to guard it and defend the construction materials and other things like soldiers, at the peril of their lives,” and to further convince the bishop to send money, the artist added that he worried the predicament might lead to “damage amounting to thousands of scudi” and might cause a “scandal” in the end. 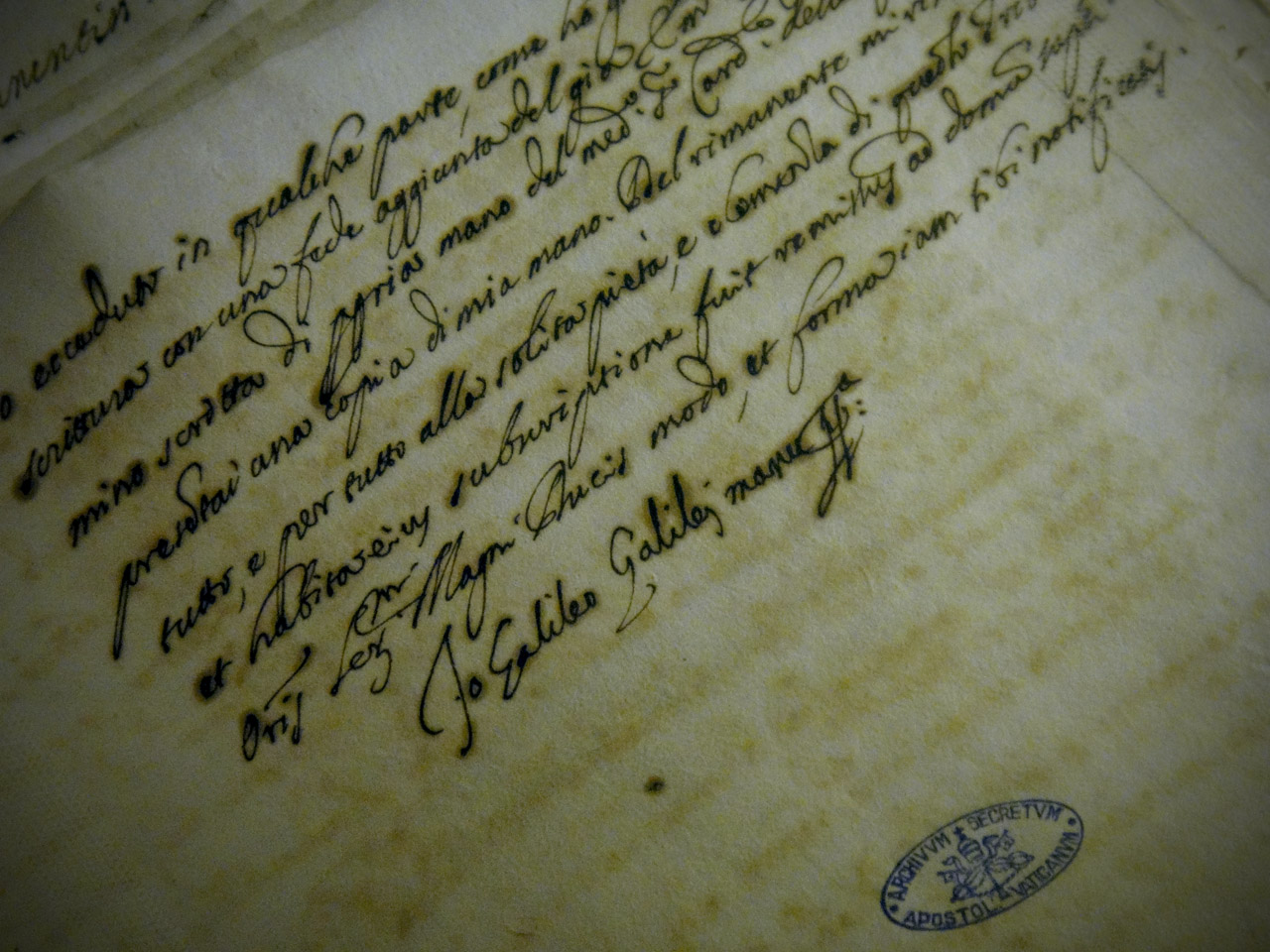 Because of his scientific discoveries that contradicted the church’s belief that the Earth was geocentric, and his open defense of Copernicus’s heliocentric theories, Galielo Galilei drew the attention of the Inquisition that found him guilty of heresy in spite of his frequent excuses of old age ailments and forgetfulness.

He was court ordered to recant his scientific opinions, accept the doctrines of the Church, and perform penances for his sin.

To spare his own life, he accepted the verdict against him and remained under house arrest for the remainder of his life, which ended at 77 years of age. (And the legend goes, which is not documented as truth or included in the official description, that after Galielo was forced to recant his belief about the heliocentrism, he muttered under his breath: “and yet, it moves”). 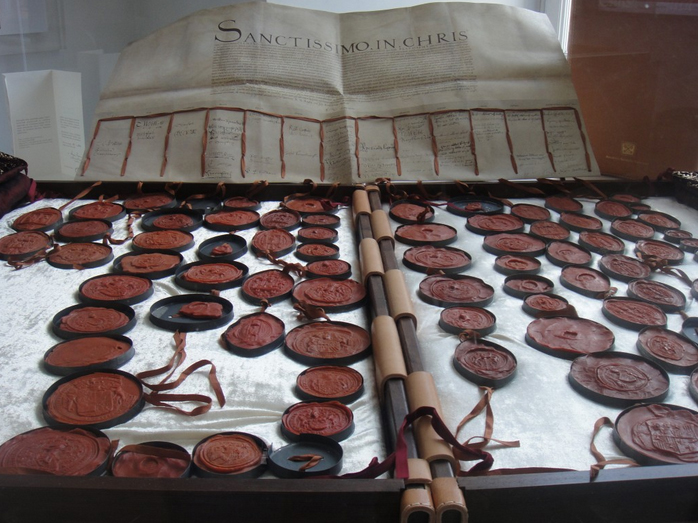 King Henry VIII  was, by today’s terminology something of a “player”. He was married 6 times, and not all marriages ended well for the wives.

This document is the appeal to Pope Clementine VII to annul the king’s marriage to Catherine of Aragon who failed to produce a heir to the throne, and in fact he fell in love with the lovely Anne Boleyn.

When the king did not receive the answer he desired, he decided to step up the pressure and with 83 signatures from his House of Lords, dukes, marquesses, earls, barons and abbots, he sent a more forceful letter to the Pope suggesting a council might be summoned to act against the Pope if the king’s wishes were denied again.

Bernini’s Angels – the sculptor’s signature on a payment notice

On December 10, 1669, Gian Lorenzo Bernini signed a notice so that the merchant hired to bring to Rome two blocks of marble intended for two angel statues for, could be paid his due amount of 150 scudi. These statues were intended to adorn the Sant’ Angelo Bridge, which today displays ten angels bearing the Passions of Christ. The two that Bernini had ordered the marble for were the angel holding the Crown of Thorns, and the angel holding the INRI cartouche. The statues were far too beautiful to be left outside in the harsh elements, so they eventually made their way to the church of Sant’ Andrea delle Fratte where Bernini attended daily Mass for 40 years.

The Summery of Bruno’s Trial

If you’ve been to Rome’s Campo dei Fiori (or plan to visit this popular square), you couldn’t possibly miss the foreboding bronze statue of Giardino Bruno that graces it’s center that looks down solemnly.  Why wouldn’t he? Afterall, he was burned at the stake here in 1597. He was convicted as an unrecanting heretic by the Inquisition for his metaphysical views that by today’s standards are considered New Age, but 4 centuries ago was heresy punishable by death.

This 1598 summary  of the philosopher’s trial was written for Marcello Filonari, a Inquisition’s file on Bruno, dating from when the Roman Inquisition trial began in 1593, to 1597 when the works of Bruno were censored. This important document was not discovered in the Vatican Secret Archives until 1886 when it was found filed as “Miscellaneous”.

The Regula Bullata of the Franciscan Order in a papal register

In 1221 Francis of Assisi appeared before Pope Innocent III and appealed for his endorsement of Francis’s Rule of evangelic life, the rules that identified the Franciscan movement initiated by Francis.

On November 29, 1223, the Pope’s bull “Solet annere” confirmed Francis’s Rule of Life, which includes 12 chapters of principles of evangelical life as determined by Francis. This important document is what solidified the Franciscan movement.

Other impressive documents on exhibition worth seeing:

The excommunication of Martin Luther
The Pope’s secret writing
The “deposed” Pope
Conclave regulations
A despairing message from Marie Antoinette of France
Lucrezia Borgia, a “Pope’s daughter”
Trial of the Templars of France
The Last Crusade
Nicolaus Copernicus: A canon who studies the stars
The Birth of the Vatican City State

* Museum Hours: Tuesdays to Sundays 9:00 AM to 8:00 PM (last admission at 7 PM)
* Combined Ticket Museum + Exhibition: € 12 adults, € 10 concessions, € 2 “Ridottissimo”.
Free admission granted to children under 6 years of age, elementary and intermediate school groups, disabled people plus one carer and to “Roma Pass” and “Roma&Più” card holders. Vsitors who are usually entitled to free entry will be granted a reduced € 2 “Ridottissimo” ticket.
* Booking Tickets in advance:
Booking for individual visitors is available only when purchasing online tickets. If you book in advance you can skip the line by going directly to the ticket window.
*  For more information:  +39 060608

Thank you for stopping by and reading our blog. For more information on Rome Cabs, tours and transfers, please visit us at www.RomeCabs.com. For cultural tours in Rome and beyond, please visit our sister company Stefano Rome Tours at www.StefanoRomeTours.com. We look forward to hearing from you and seeing you in Rome! 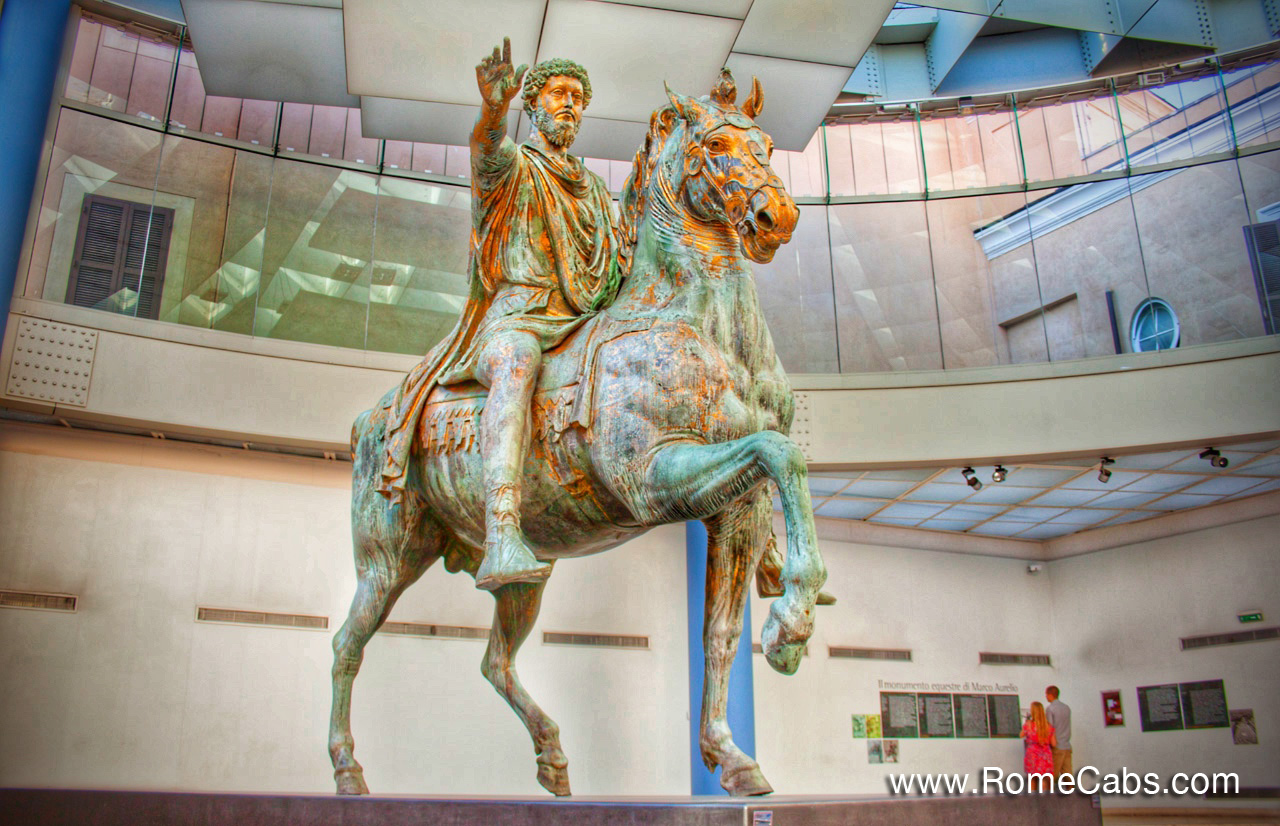