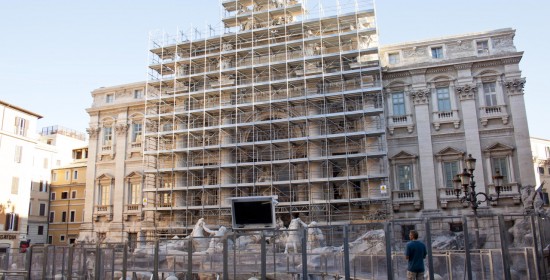 What does one of Rome’s most famous Baroque fountain and one of Italy’s most famous fashion houses have in common?: Fendi for Fountains

Fendi, one of the biggest names in Italian fashion, has donated approximately 2.10 million Euros to restore the 18th century Trevi Fountain. That’s a pretty penny Fendi tossed into the fountain!

Each day thousands of tourists flock to the Trevi Fountain to admire the water and marble masterpiece, and toss a coin over their shoulder to ensure a return to the Eternal City.

Immortalized in movie classics such as Fellini’s La Dolce Vita and 3 Coins in a Fountain, the Trevi Fountain is one of Rome’s (and Italy’s!) most significant and well recognized landmarks.

But as with so many of Rome’s ancient and aging monuments, the Trevi Fountain has been in need of restoration in order to preserve this precious heritage and ensure that future generations of coin-tossing romantics will have the opportunity to enjoy the fountain as much as we do today.

WHAT TYPE OF RESTORATION IS TAKING PLACE AT TREVI FOUNTAIN?

Some of the restoration works include cleaning the marble statues and travertine, re-water proofing the basin, and replacing the gilted latin inscriptions.

HOW LONG WILL THE FOUNTAIN RESTORATION LAST?

In early June 2014 visitors found the Trevi Fountain drained and sealed off with fencing.  The restoration is anticipated to last until Fall of 2015.

WHAT DOES TREVI FOUNTAIN RESTORATION MEAN FOR VISITORS?

A see through screen fencing the fountain allows visitors glimpses of the fountain itself and the works.  Scaffolding was raised along the back wall of the fountain, but in hopes to minimise the eye-sore of the metal structures and millions of ruined photos, a screen with the image of the fountain is expected to be put in place to cover the scaffolding.

A “runway” bridge was installed above the now empty water basin allowing visitors a closer look at the stone sculptures, as well as view the restoration process.  This suspended walkway opens in the afternoon, and it can be accessed through an opened entryway that is otherwise locked.  Depending on how many people wish to enter and walk on the bridge, you can expect a line.

For visitors who wish to to continue the coin tossing tradition,  there is a small basin installed in front center of the fountain with an image of Neptune as the backdrop. Otherwise, people have taken to tossing their coins in the large empty basin.

From a distance you can watch the restoration process as well as various historic scenes on 2 large television screens installed  on top of the see through screens.

WATCH VIDEO on how to visit the Trevi Fountain during restoration

In its Fendi for Fountains initiative, Fendi also pledged 320,000 Euros to restore the late Renaissance “Quattro Fontane” ( the Four Fountains), that grace a small intersection of Via XX Settembre and Via delle Quattro Fontane.

WHAT OTHER RESTORATIONS OF MONUMENTS HAVE TAKEN PLACE IN ROME AND ITALY?

Fendi is not the only sponsor helping restore Italy’s cultural heritage. Other Italian and non-Italian businesses stepped up and pledged millions of Euros to help restore Italy’s historic monuments.

Tod’s shoes founder Diego della Valle donated approximately 25 Million Euros to help restore the Colosseum.  At 2,000 years old, the Colosseum has been aging and deteriorating with reports of masonry and stones falling to the ground. Pollution from the nearby street covered the ancient stones in dark soot.

At the time this blog has been posted, most of the scaffolding is still in place, but in the areas where the scaffolding was removed reveals beautiful and clean surface.

Yuzo Yagi, a Japanese tycoon and owner of a fashion business, donated 1 million Euros to restore the 2,000 year old Roman pyramid erected in honor of a roman dignitary.

The pyramid was in danger of deteriorating with cracks from which vegetation and bushes began to grow, as well as soot and grime from street pollution.

Currently, the scaffolding is more than half way removed revealing a brand new looking pyramid!

Fendi is not the only Italian luxury brand to help save Rome’s landmarks.

Bulgari, the 130 year old jewelry house, donated 1.5 million Euros to restore the sweeping stairway that connects the square below (Piazza di Spagna) to the Trinita dei Monti church at the top.

Restoration efforts include cleaning the travertine steps, repair nicks in the stairs and cracks out of which vegetation began to sprout.

In Venice, the famous 400 year old Rialto Bridge has also been in need of restoration, and Diesel fashion house owner Renzo Rosso, sponsored 5 million Euros in efforts to clean and restore one of Venice’s most important landmarks.

Please come back to this blog for new updates as we continue to follow up with the Trevi Fountain restoration progress and bring you new photos and information.

Thank you for stopping by.