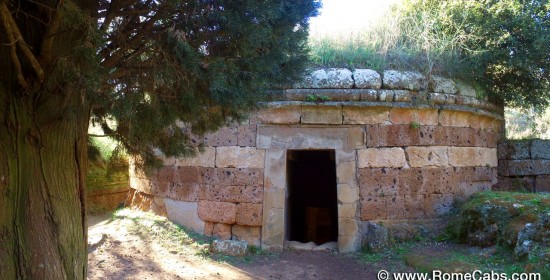 Buon giorno and welcome to Stefano’s RomeCabs, your trusted company for private transfers, day tours and shore excursions in Rome and beyond.

In this travel blog we show you 10 of the most amazing Etruscan tombs to visit inside Banditaccia Etruscan Necropolis in Cerveteri.   Cerveteri is part of our Countryside Splendor Day Tour from Rome and Shore Excursion from Civitavecchia.

The Etruscans were Western Europe’s first highly advanced civilization that dominated the Italian peninsula long before Rome was even established. In fact, before Rome became a republic it had 7 Etruscan kings.

Within 2 centuries the Etruscans culture and language vanished – with no written records of their history remaining, their language and alphabet only partly understood, the only sources of information about this highly evolved and mysterious civilization are their tombs and grave goods that have survived along after they ceased to exist.

At nearly 1,000 acres, the Banditaccia Necropolis in Cerveteri  is the largest necropolis in the Mediterranean area that spans across seven centuries of the Etruscan existence.  Currently, only about 25 acres of the necropolis that includes about 1,000 tombs – some of the best ones have been made accessible and can be entered and explored.

It’s amazing to see the progression of the Etruscan civilization evolve from simple ossuary type urns buried in the ground, then large circular tumulus that look like mounds,  more contemporary dice shaped tombs organized into city blocks with streets for funeral procession, and then underground tombs when they ran out of available space to build above ground.

The Etruscans built their dwellings out of perishable materials such as wood and clay that have not survived, however, the elite class built their tombs as their permanent homes in the afterlife by carving them out of volcanic rock to resemble the actual homes of the deceased, giving us a glimpse into how the Etruscans lived more than 2,500 years ago.

To carve out the many tumuli (or circular mounds), the Etruscans cut pathways deep into the tuffa rock ground where the ground level was determined to be, and then sculpted the circular structures (as one would carve relief sculptures onto a surface). The chambers were hewn into the living rock. When they ran out of surface space to build above ground, they went underground and created hypogean tombs.

10 Most Amazing Etruscan Tombs to Explore 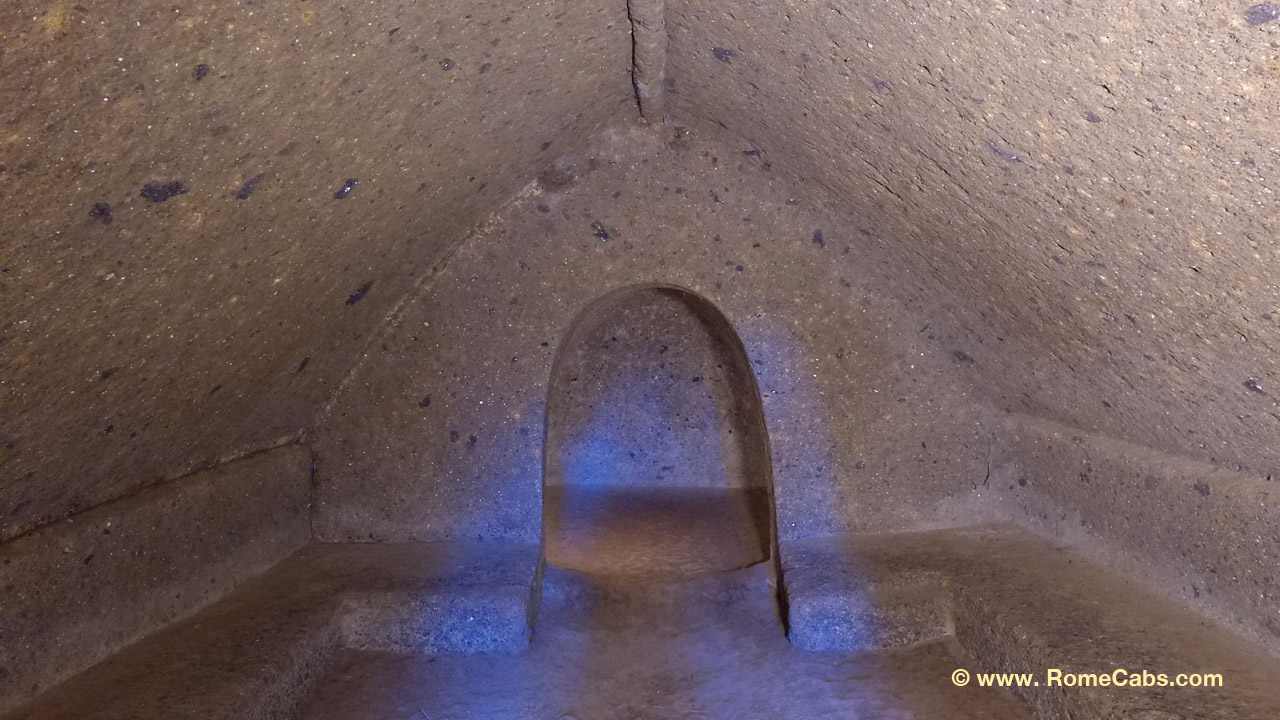 One of the most ancient Etruscan tombs dating back to the beginning of 7th century BC, the Tomb of the Hut was built to represent an ancient type of hut with a sloped roof that almost reaches the floor and a wooden beam supporting it. The “living room” in the front where the grave good were placed is in the front, and the “bedroom” behind it where the deceased was laid to rest on wooden bed previously placed on a floor covered with river stones. This  was the type of huts with thatched roofs that the Etruscans inhabited during that early period. 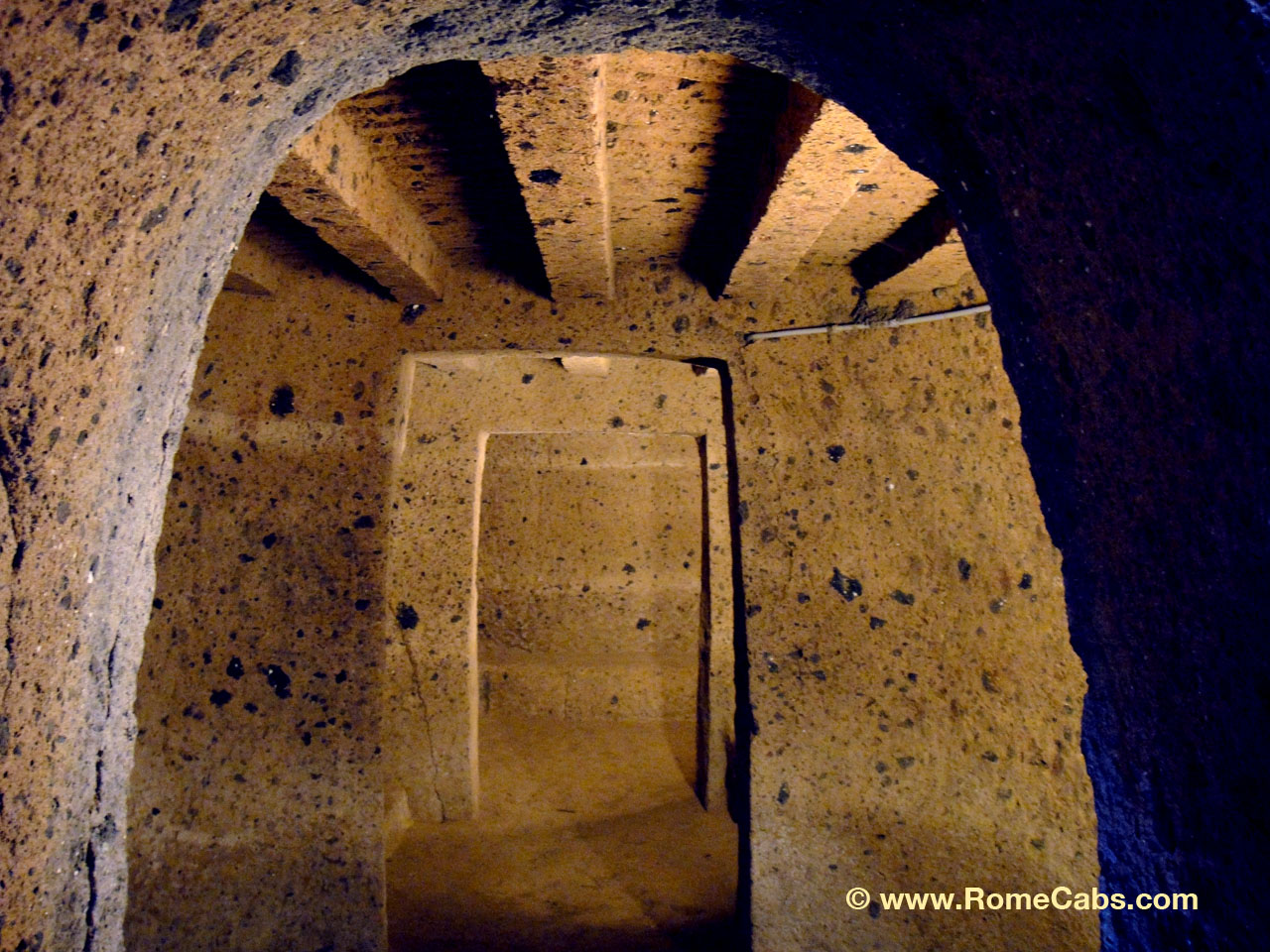 The floorplan of this large 7th century BC tomb consists of 3 funerary chambers that lead from a circular vestibule in a cross shape. Faded remains of painted decorations are still visible on the wall and ceiling of the main chamber. 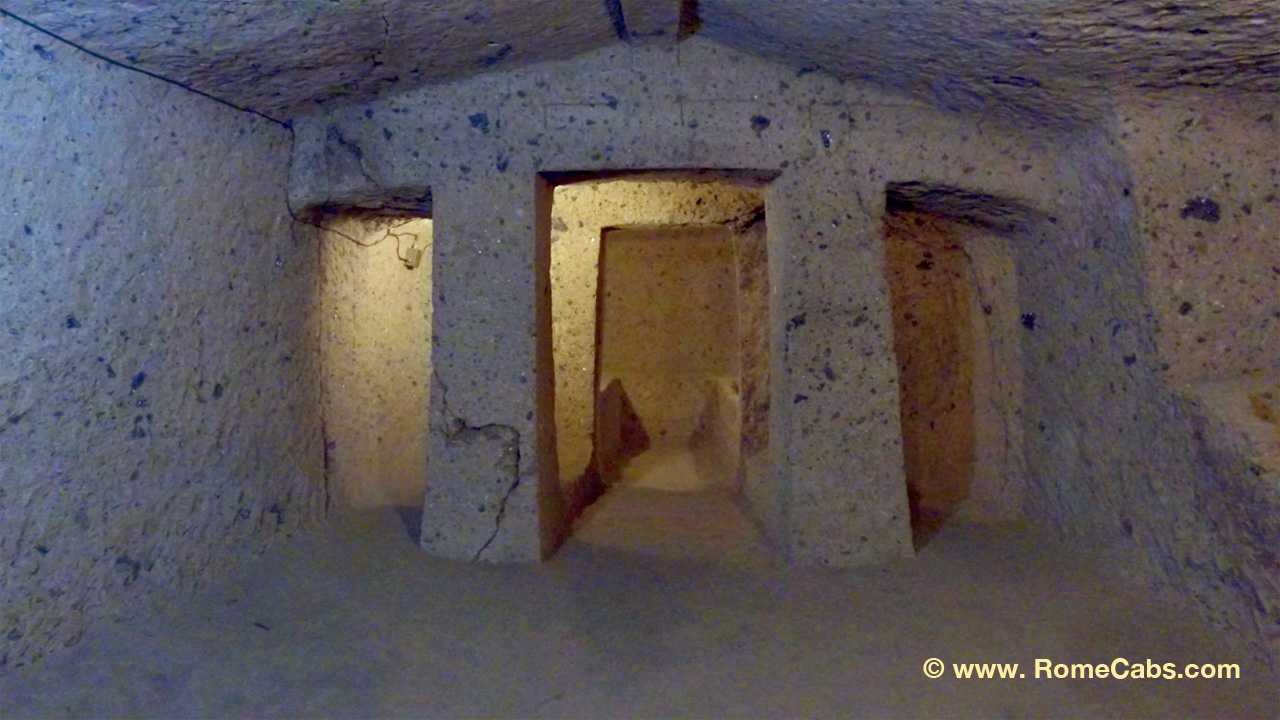 Inside this enormous tumulus is a latter 7th century BC Etruscan tomb is flanked by lateral cells and has a gabled roof with faded geometric paintings. Its front chambers to other inner chambers. The first chamber has two pillars carved right out of the rock that support a pediment representative of the type of domestic architecture found in the residential homes of that time. 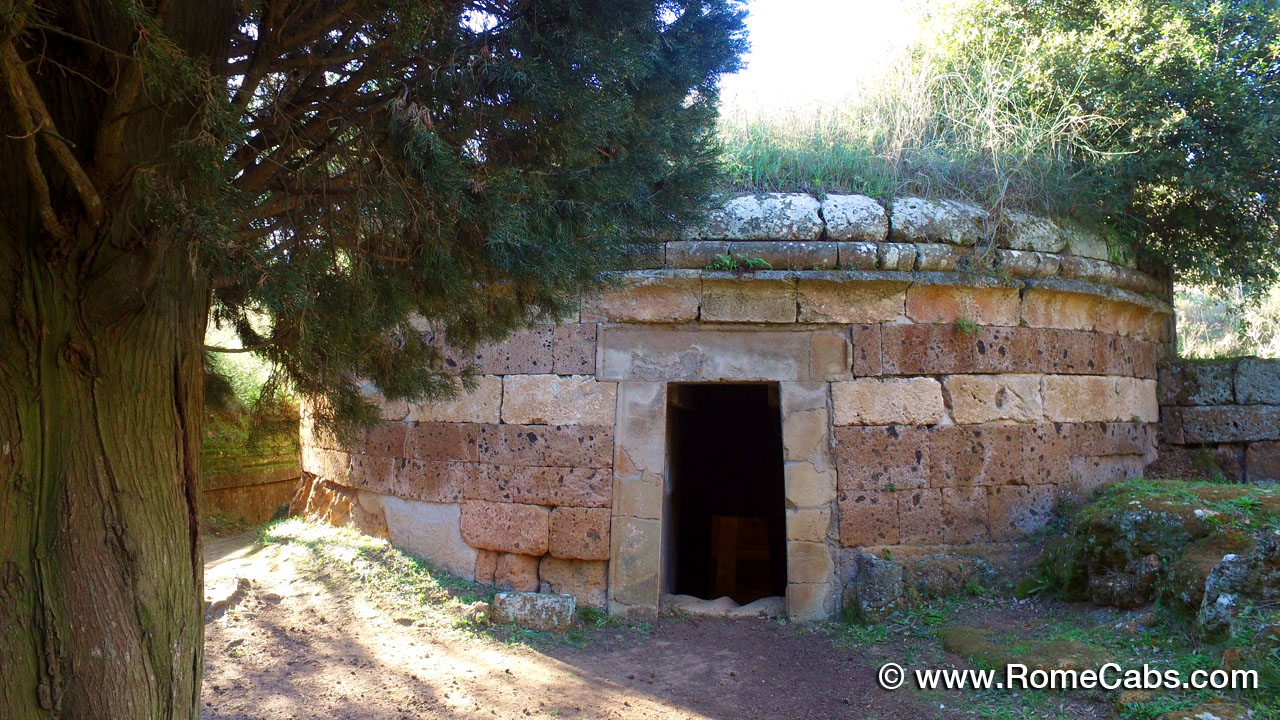 This 6th century BC remarkably beautiful polychromed tumulus had its external circular wall built with with bands of red tuffa rock, pale white macco, and grey peperino.  Upon entering, you will pass two small lateral cells at the entrance and a large chamber with sloped ceiling and 2 central pillars dividing the chamber into 2 areas.

Four stone carved klinai – or a type of ancient couch used for reclining – are lined alongside the walls in a “U” shape.  Traces of paint is still visible on these ancient walls. 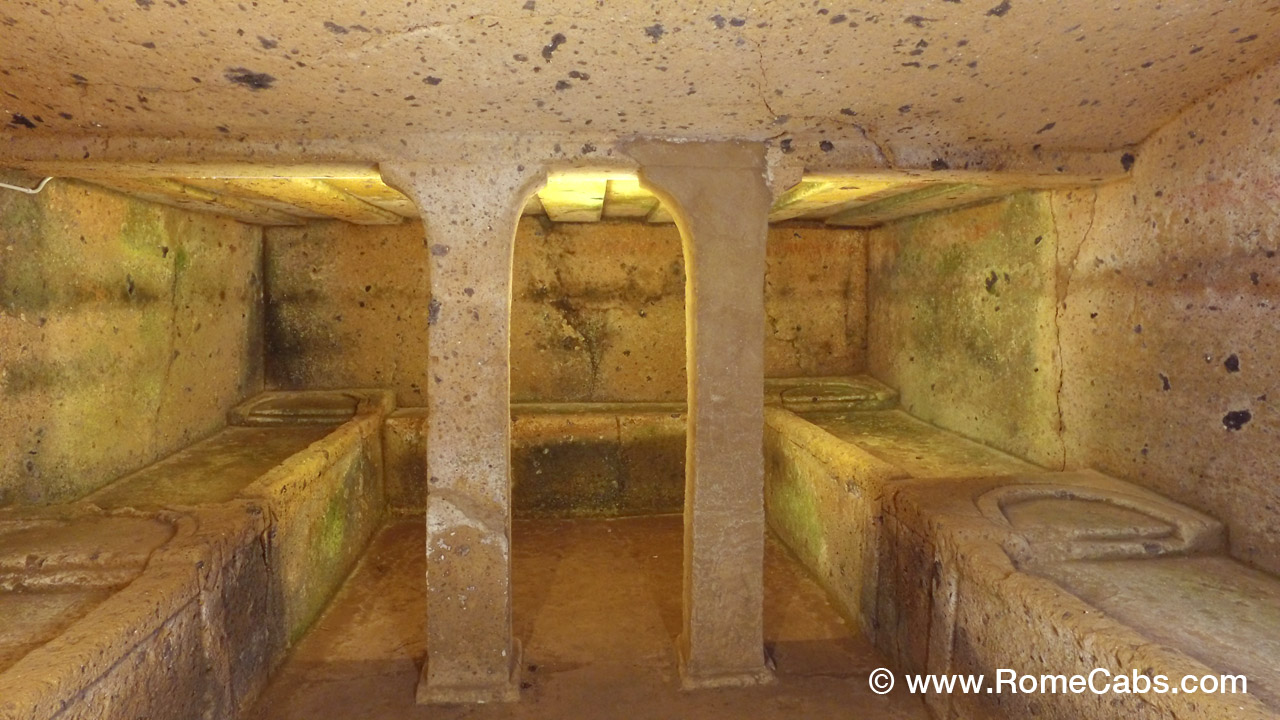 This 6th century BC tomb features 2 columns decorated by a capital in the ancient Aeolian style carved directly out of the rock, and a form of coffered ceiling.  Along the side walls are small beds entirely out of tuffa rock that represent the Klinai – banquet reclining couches.

This vestibule has 3 doorways framed with the mystical Etruscan symbol of the door to the afterlife, that lead to 3 small burial cells with male and female funerary beds side by side like in a small bedroom: the left side for the man, and the right side (with a house roof shape at the head and foot of the bed) for the woman. 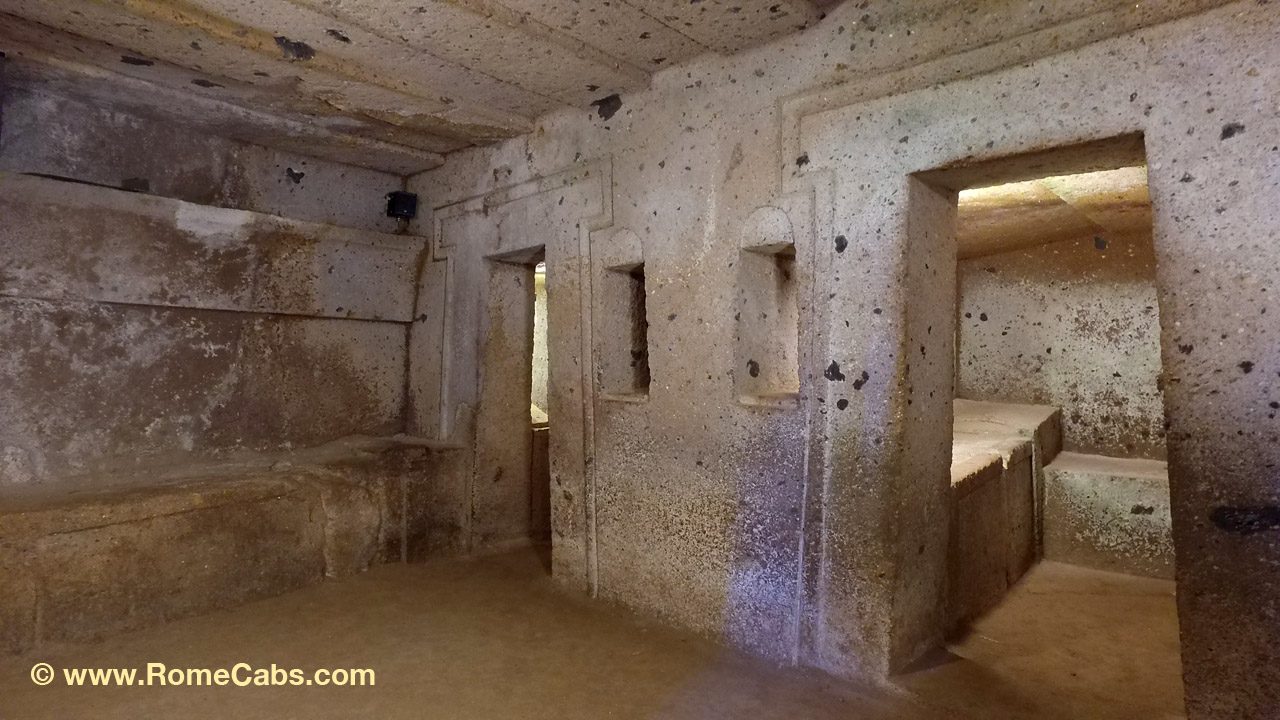 This 6th century BC tomb is named after the large ridged cornice (molding) that wraps around the walls of the vestibule. Two stone thrones with footrests were carved on each side of the main entrance. 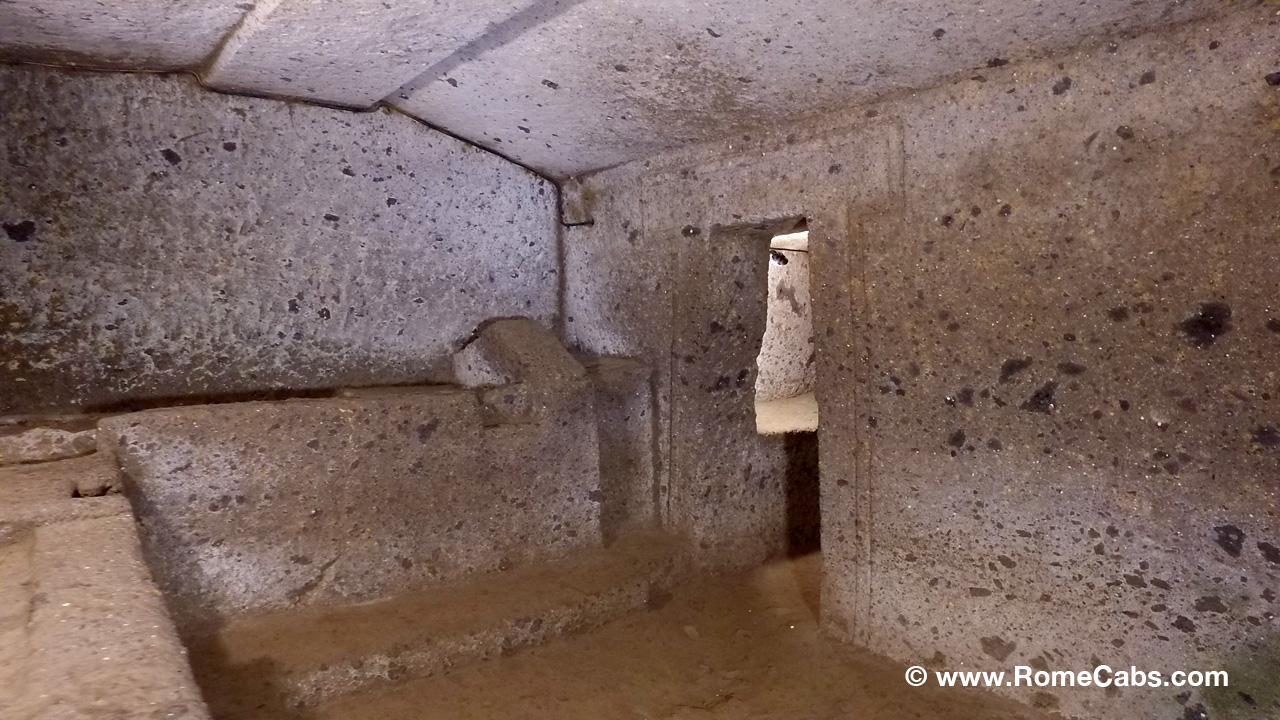 Located inside the same large tumulus as 3 other tombs excavated within, Tomb of the Greek Vases gets its name from the hundreds of Attic vases that were discovered inside the tomb.  This rectangular tomb also has 2 cells at each side of the front entrance, a spacious anteroom, and triple chambers within – one of the most common among all tombs, and representative of Etruscan elite house floor plans of the Archaic period.

The main vestibule is lined with large carved beds – some with small hollows to possibly hold up a raised wooden platform to support the deceased. Each of the 3 inner chambers have 2 funeral beds. 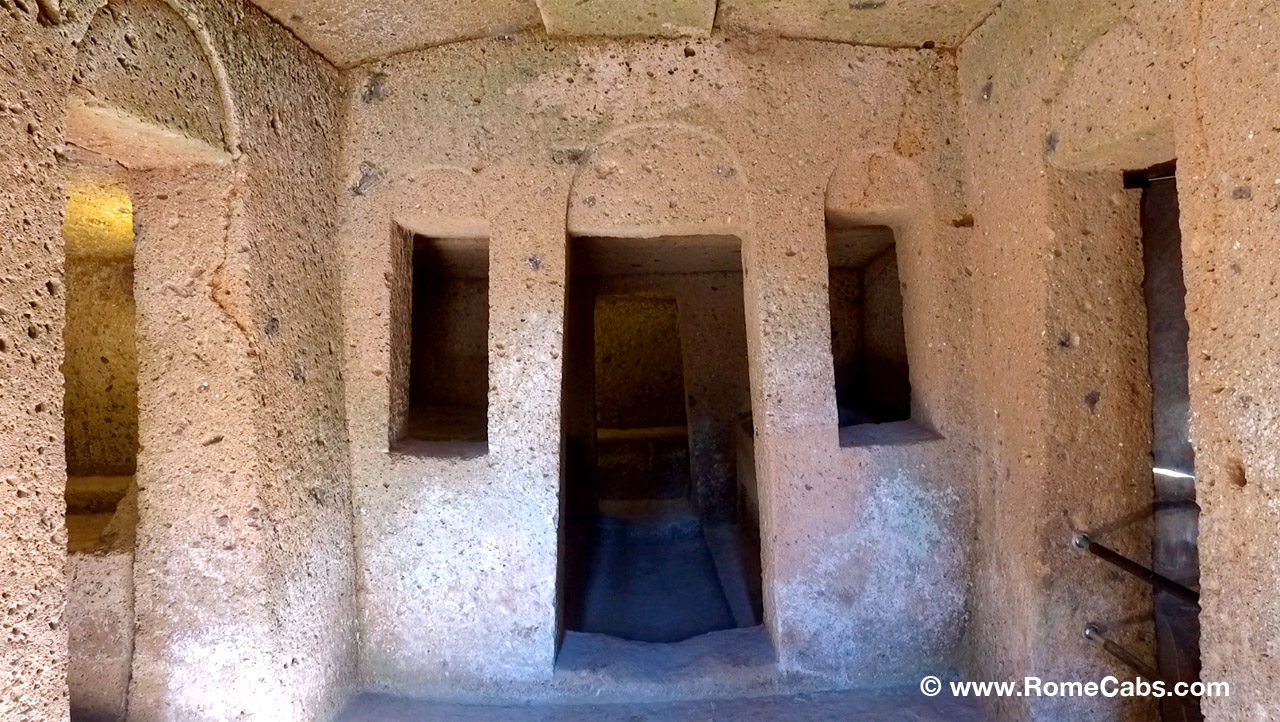 This complex 6th century BC tomb is carved out of a large trapezoidal chunk of tuffa rock in a cruciform floor plan, sloped gabled roof, and arched doorways.  The arch is an architectural element popular in the 6h century BC Archaic period and prevalent only in the necropolis in Cerveteri. The atrium is surrounded by chambers: 2 at each side…..and an ante chamber lined with 2 funerary beds that leads into another smaller posterior chamber with a carved bench along the 3 walls.

7 Amazing Places to visit on your Etruscan Tours 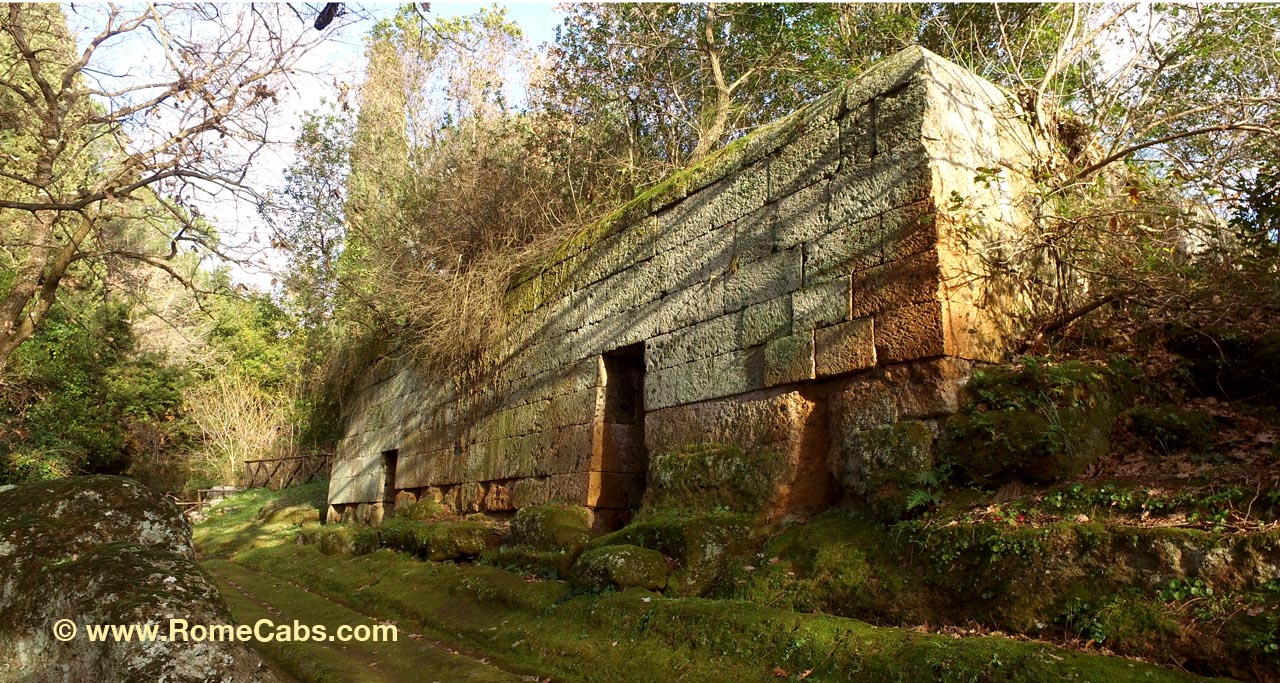 This early 6th century BC tomb is located within a block dice shaped structure lined with tomb entrances like small shops,  overlooking the famous funerary road Via Sepolcrale marked the deep grooves made by centuries of cart wheels that transported the deceased during funeral processions.

Unlike the other Etruscan tombs, this one is one of the “lesser known”, and left unmarked.

You have to know where to go and which tomb to enter, and access it from the side of Sala Mengarelli where the snack shop and multi media hall is.  This tomb belonged to two brothers and has 2 parallel burial chambers. What makes this tomb unique is the ancient Etruscan graffiti carved into the rock inside each of the burial chambers. The name Marce Ursus is etched in one of the tombs.

We have the rare opportunity to see an actual Etruscan graffiti with their mysterious backwards looking alphabet and inscriptions written from right to left. The Etruscans are said to have borrowed their alphabet from the Greeks and adjusted it to suit their style, and the Romans then borrowed their latin alphabet from the Etruscans. Because no written texts have survived from the Etruscan times, their language and alphabet have only been partially deciphered and still remain a mystery.

Saving the of the Etruscan tombs best for last, also as it’s one of the  4th century BC tombs when the Etruscans began to deplete available surface area in the necropolis to build additional tombs, so they solved this shortage of space by digging underground to build complex subterranean tombs.

The famous Tomb of the Reliefs that belong to a family named Matuna is such a hypogeum tomb, accessible by descending a long staircase. This tomb is visible only through a glass window as its interior is climate controlled to preserve the fine decorations.

This remarkable tomb features a gabled ceiling supported by two pillars decorated with carved items one would find in an Etruscan household: jugs, rope, knives, pots, axe, and… a house cat that’s stretching out.  The items appear to be hanging on the wall surface due to lack of cabinets used in that era.

The tomb is surrounded by a raised platform with ridges that divide some 31 funerary beds. Wall niches allowed for more deceased to be accommodated, with soft looking stone pillows for them to rest on.  The walls, as with the columns, are decorated with bas relief in colorful stucco depicting objects used in daily life by the Etruscans, including various weapons and helmets that belonged to Etruscan warriors. Animals and mythical figures also adorn the walls.

Thank you for visiting us. For more information on our Ostia Antica and Cerveteri - Ancient World Tour, and Countryside Splendor Day tour from Rome and shore excursion from Civitavecchia that includes a visit to the Etruscan tombs in Cerveteri.

Please WATCH our TOUR VIDEO BELOW,  CLICK on the TOUR TITLE and visit our website for information on tours that include Etruscan tombs, prices and to book your Etruscan adventure!

We look forward to showing you beautiful places in Italy!

Rome In a Day Tour