Orvieto Cathedral and its unmistakable facade 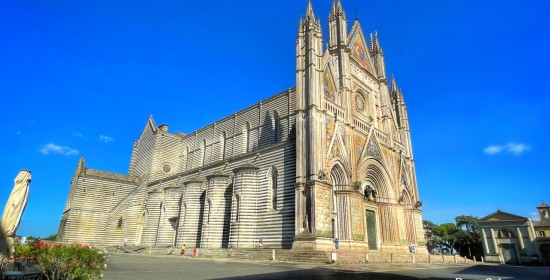 Buongiorno and welcome to Stefano’s RomeCabs, Rome’s leading tour company.  In the heart of the bucolic region of Umbria is Orvieto, an ancient town strategically built atop an isolated butte of a volcanic tuff 640 feet above the junction of the rivers Paglia and Chiana.

A former important Etruscan settlement and later a Roman city called Urbs Vetus (from where its contemporary name is derived), Orvieto thrived during the Middle Ages controlling the road between Rome and Florence.

Orvieto was a major cultural center and Papal State and also the seat of the Studium curiae  during extended periods of papal occupancy. Studium curiae was the research institution that accompanied the papal court functioning as an academy for its members and their entourage. Thomas Aquinas taught at the studium in the 1200s.  Orvieto was also home to five popes in the 13th century, most importantly Urban IV and Nicholas IV who were instrumental in the construction of the Cathedral of Orvieto.

Orvieto still retains its Medieval architectural charm with a warren of narrow streets and an impressive cathedral that soars skywards above the rooftops of Orvieto’s palazzi and medieval buildings.

Among the most striking things our guests tell us they’ve seen on our Orvieto day tour from Rome is the majestic facade of the Cathedral of Orvieto, one of the great masterpieces of the Late Middle Ages.  A combination of Gothic and Romanesque architectural styles with an elaborately embellished facade, the Cathedral of Orvieto is one of the most beautiful churches in Italy (if not in the world).

Bejeweled mosaics take up every inch of the facade not already occupied by sculptures and architectural motifs. Late afternoon sunshine bathes the mosaics in the sun’s warm rays giving them a sparkling gilded appearance.

In this article about the Orvieto Cathedral and its unmistakable facade, we will describe the details, symbols, and significance of the richly adorned facade to help viewers better understand what they are looking at when admiring this architectural and artistic masterpiece. Before we delve into details, here are a few facts about the cathedral. 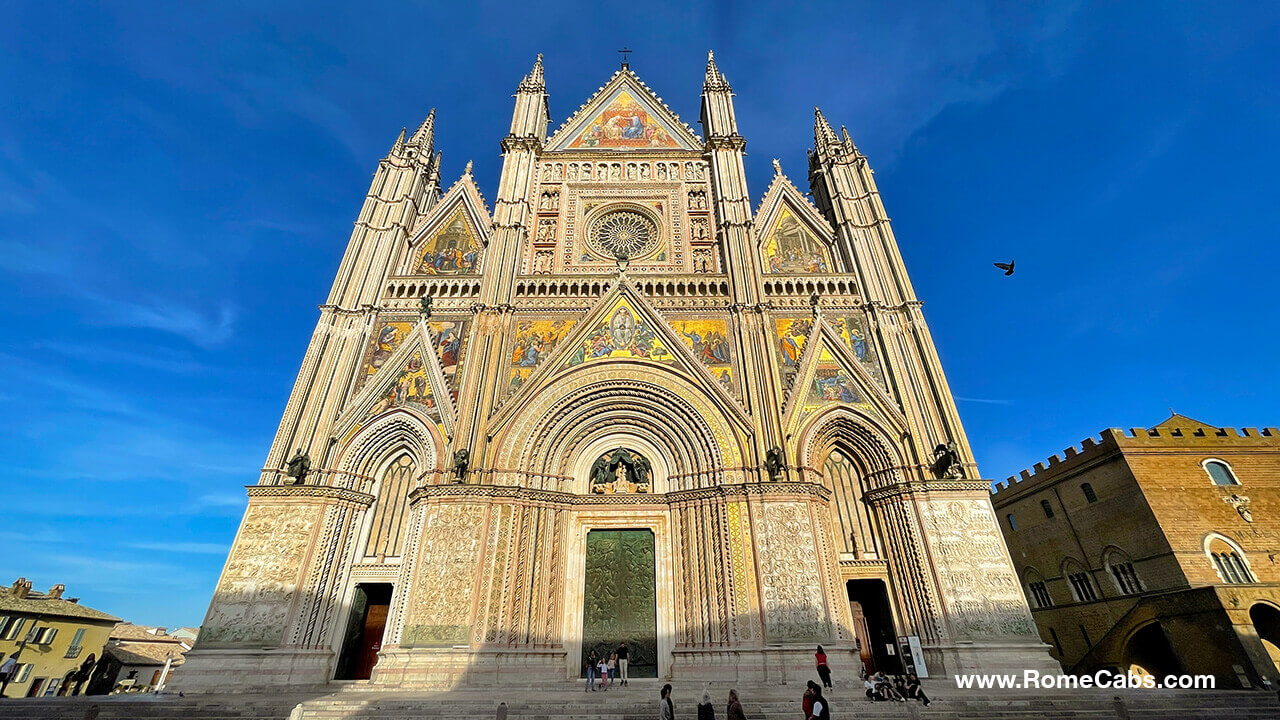 Quick Facts about the Cathedral of Orvieto:

When was the Cathedral of Orvieto built?

The Cathedral was completed in 1541

Who built the Cathedral in Orvieto?

It is said that the Cathedral of Orvieto was constructed under the orders of the comune and Pope Urban IV who, a few decades before the Cathedral was commissioned, made Oriveto his home.

Pope Nicholas IV, who was a generous supporter of building the cathedral and a long-term resident of Orvieto, laid the foundation stone of the new cathedral in 1290.

Why was the Orvieto Cathedral built?

The primary purpose for its construction was to build a large cathedral dedicated to the Assumption of the Virgin Mary (Santa Maria Assunta) to replace two older churches in the square, and to provide a suitable home for the Corporal of Bolsena.

What is the Miracle of Bolsena?

And what does the Miracle of Bolsena have to do with Orvieto?

In 1263 a miracle occurred in a nearby town called Bolsena when a German priest by the anime of Peter of Prague stopped at the Church of St Cristina in Bolsena during his pilgrimage to Rome. The miracle occurred during Holy Mass when a consecrated host began to bleed onto a corporal (the small cloth upon which the host and chalice rest during the mass).

The pius priest had doubts about transubstantiation which states that the bread and wine become the body and blood of Christ at the moment of consecration during Mass. Pope Urban IV, who was in Orvieto, sent an investigator to Bolsena to bring him the blood-stained cloth and the host.  Today, the corporal is preserved in a large silver shrine as a relic in the Chapel of the Corporal inside the cathedral.

In 1264, Pope Urban IV created the Feast of Corpus Christi focusing on the Holy Eucharist, emphasizing the joy of the Eucharist being the Body and Blood, Soul and Divinity of Jesus Christ. This feast day is a major public holiday in Orvieto, during which the Corporal of Bolsena is paraded through the city with much celebration.

Now on to the best stuff: the amazing facade of the cathedral!

For reference, below is a photo we took of the Orvieto cathedral facade offering you a visual reference of the mosaics, bas-reliefs, bronze statues, and the rose window discussed below.

Orvieto Cathedral and its unmistakable facade

The first thing that catches your eye when you see the Cathedral of Orvieto is its compelling  Gothic facade with harmonious and balanced architecture, intricate sculptures, bas reliefs, and glittering mosaics that create an iconographic masterpiece recounting biblical stories.

Italian architect and sculptor Lorenzo Maitani (born in Siena in 1275 and died in 1330)  was the Master Builder responsible for the construction and decoration of the cathedral and its facade.

Read on to discover the different elements that adorn the facade in greater detail. First, we mention the rose window as it’s the prime focus of the facade. Then, we will start bottom up with the large marble reliefs, followed by the bronze statues, the mosaics, and lastly, the doors (as they are new and not part of the original medieval cathedral design).

The Rose Window of Orvieto Cathedral

The intended focal point of the cathedral’s facade is the rose window which was created by Andrea di Cione (better known as Orcagna) as a circular rose window inscribed within a square frame.  Work on the rose window began in 1354 and was completed in 1380. 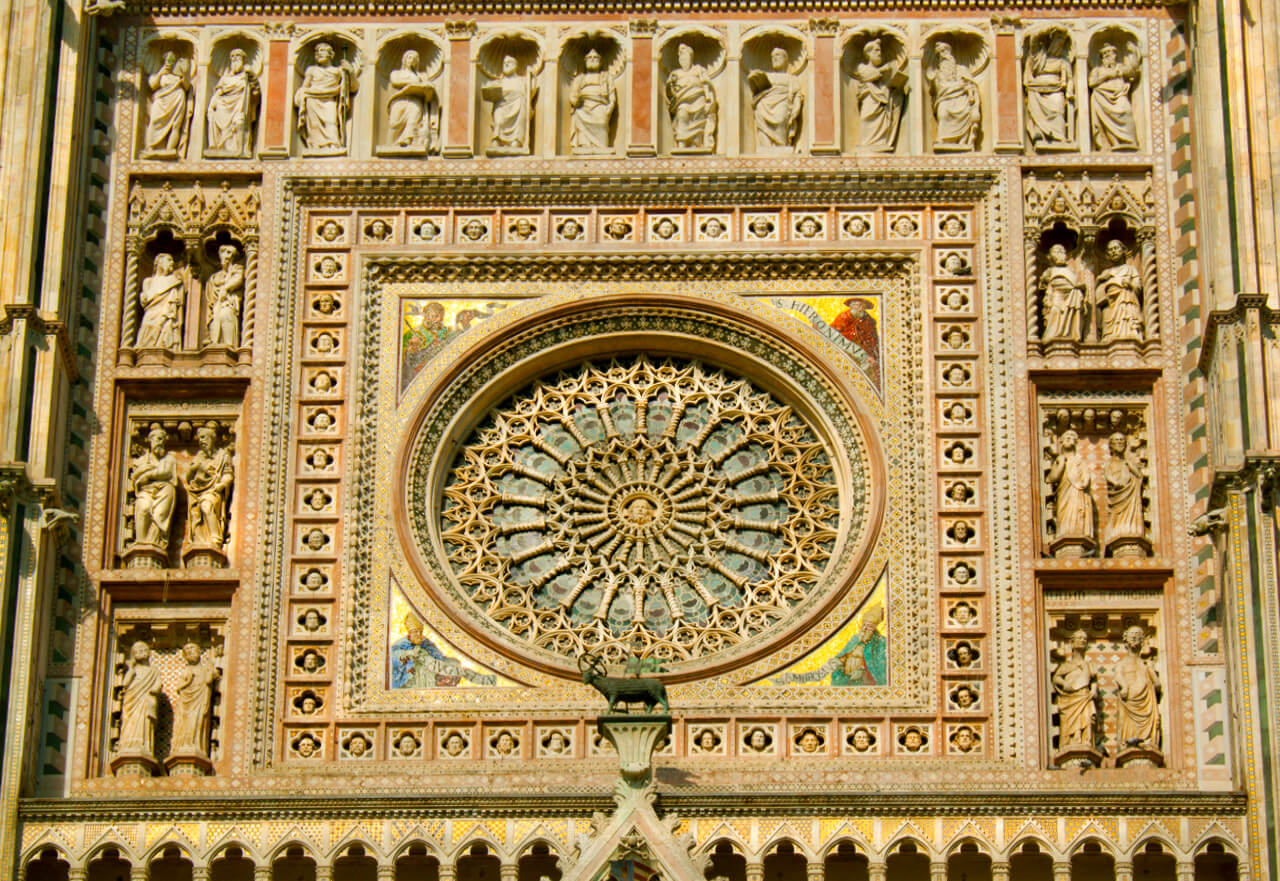 The richly decorated rose window consists of a double row of colonettes with intersecting arches supported by thin pillars. In the center of the rose window is the face of Christ the Redeemer symbolizing Christ as the cetner of God’s plan for the salvation of humankind.

Surrounding the circular rose inside the four corners of the frame are triangular mosaics of the four doctors of the church: Saint Augustine, Saint Gregory the Great, Saint Jerome, and Saint Ambrose.  Six niches flank the rose window’s frame left and right contain statues of the twelve Apostles.  The outer frame is surrounded by additional travertine carved heads that represent, among others, the 12 prophets.

The Marble Reliefs on the facade of the cathedral

The facade of the cathedral is composed of four polygonal pillars adorned with exquisitely detailed bas reliefs that represent scenes from the Bible: Old Testament with special reference to Genesis, Old Testament with special reference to Messianic prophecies, New Testament, and Judgment Day.  You can admire the lower scenes face to face, then your gaze will go upward as the bas-reliefs rise up.  The pilasters are supported by ornamental marble revetment at their base.

They are among the most famous of all 14th-century marble reliefs and could be considered a Summa Theologica in marble for they depict in great detail biblical narratives of the Christian faith. The visual stories read across the facade from left to right like open pages of a colossal medieval manuscript. The identity of the sculptors who created these marvelous bas-reliefs is unknown, however, some scholars credit these masterpieces to Maitani and his collaborators.

The various biblical scenes are separated by branches and leaves of ivy, vine, or acanthus which are biblically symbolic plants.  Ivy is an evergreen and recurring medieval motif that symbolizes eternal life and resurrection, offering hope of a rewarding afterlife to medieval observers. The eucharistic grapevine was selected for the Last Judgment pillar in reference to Christ’s bloody sacrifice to save humanity.

The 1st Relief pillar depicts episodes from the Book of Genesis (creation of days, animals, and plants), the birth of Adam and Eve, the garden of Eden, the original sin, the divine condemnation, and Abel slain by Cain. 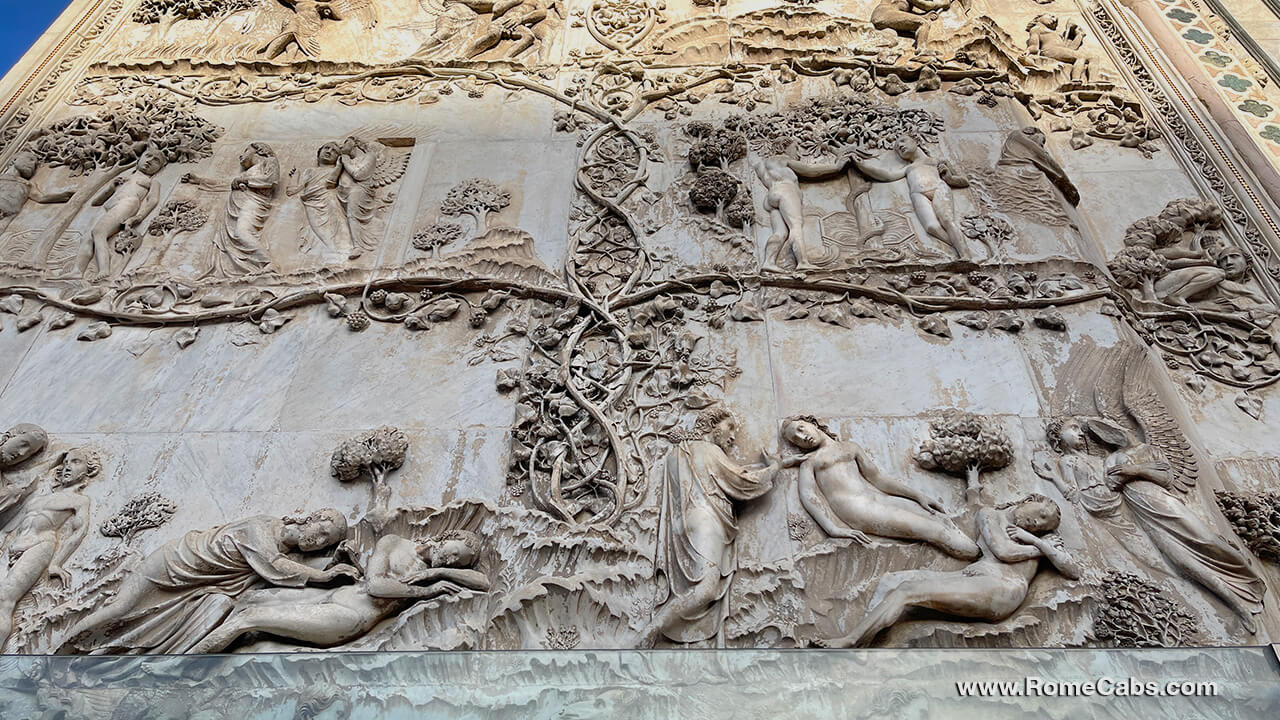 The 2nd Relief pillar links the Old and the New Testament focusing on Messianic prophesies and depicts the Jesse Tree.

Jesse, the father of King David, is portrayed reclining at the base of the genealogical “tree” that rises up through Abraham, King David, and Solomon, reaching the Virgin Mary, and a regnant Christ at the top. Along the sides are prophets and episodes from the Old and New Testaments. 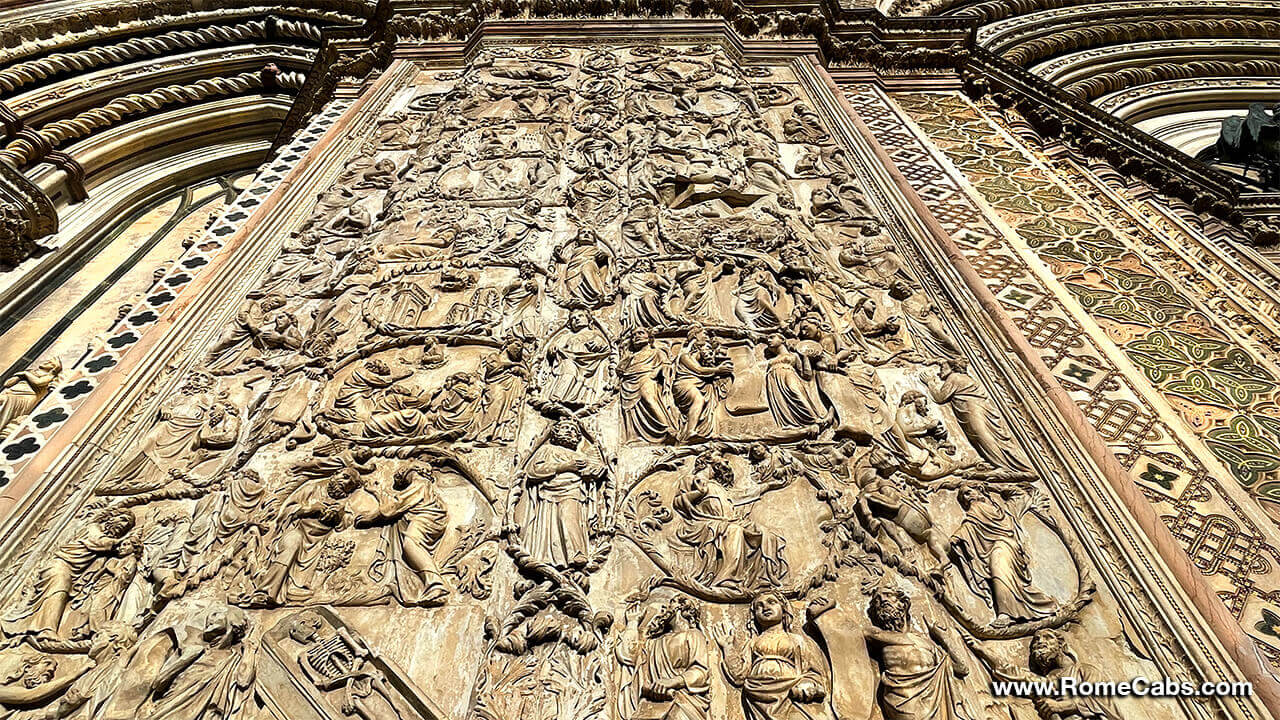 The 3rd Relief pillar portrays 16 episodes of the life of Jesus from the Annunciation to the Crucifixion.

The depicted gospel stories include the Nativity, Annunciation, massacre of the innocents, kiss of Judas, and the scourging of Christ and Mary at the holy sepulcher. 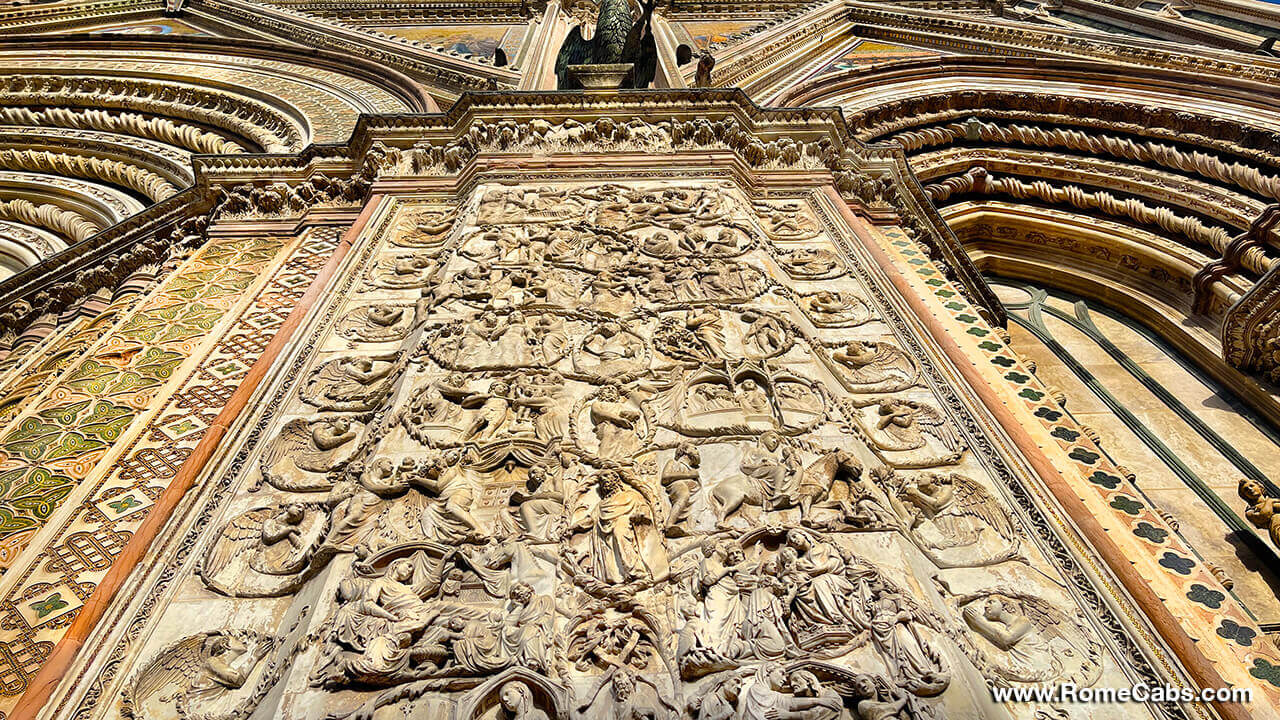 The 4th Relief pillar portrays the Last Judgment with terrifying images of the damned brought to Hell by terrible devils, and the saved resurrected and receiving their divine reward.

This last pillar serves as a final reminder for Medieval observers to follow the moral teachings of the church,  the parables of Jesus, and the Ten Commandments in order to be rewarded with an afterlife in Heaven. 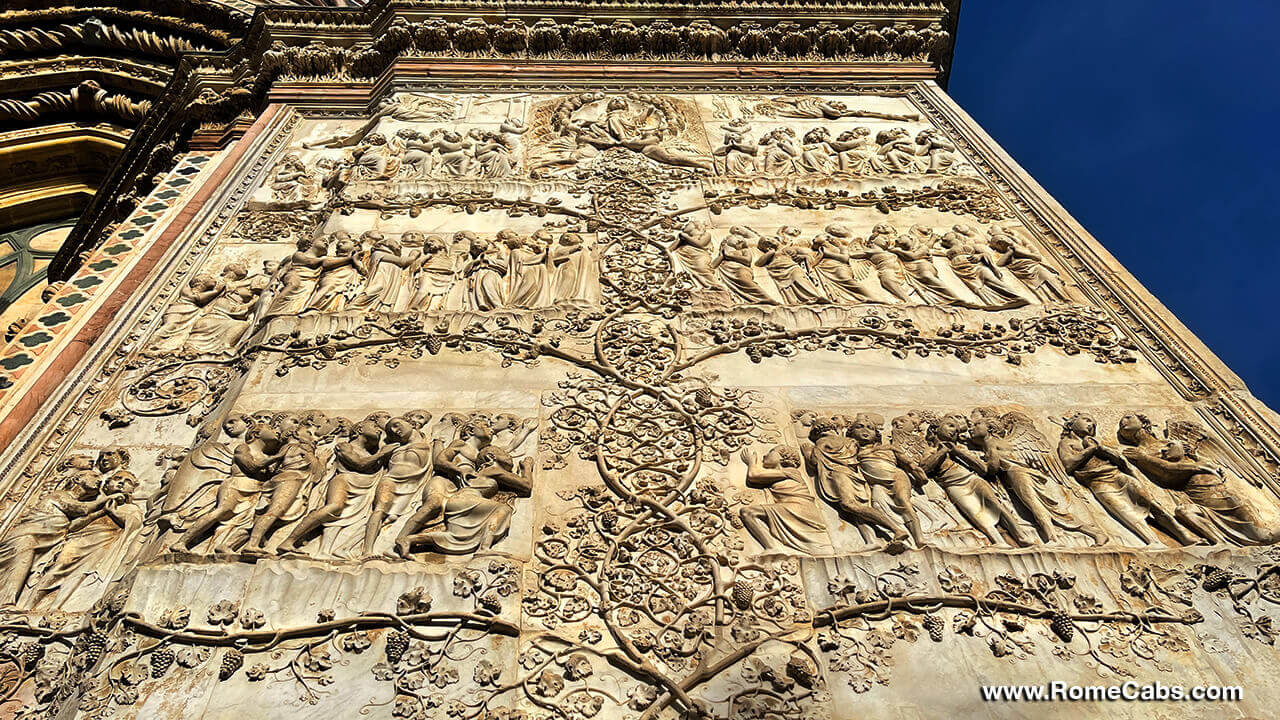 On top of each of the bas-relief panels that frame the portals, you will notice four large bronze statues placed over finally carved cornices that stand apart from the surface of the facade and protrude forward. 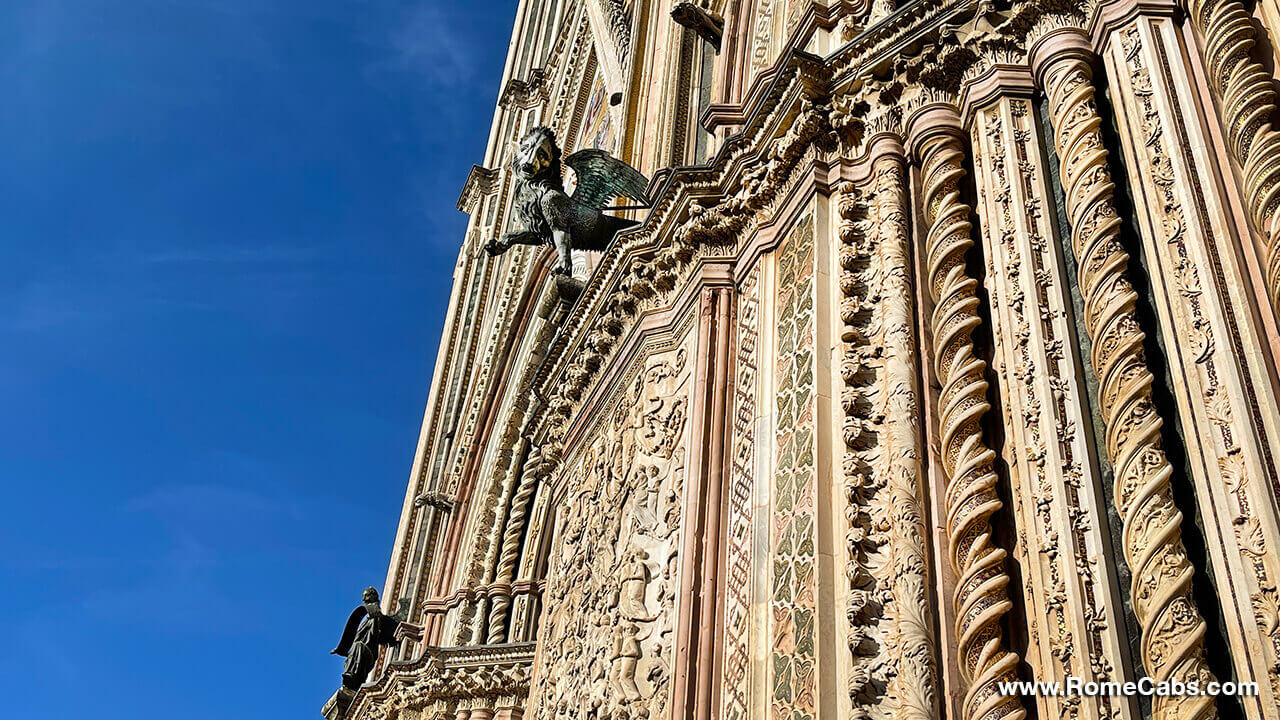 These statues represent the emblems of the four evangelists: Saint Matthew (the Angel), Saint Mark (the Lion), Saint John (the Eagle), and Saint Luke (the Bull). These are copies as the originals are preserved inside the Museum.  These bronze statues are assumed to have been created by Maitani and his collaborators. 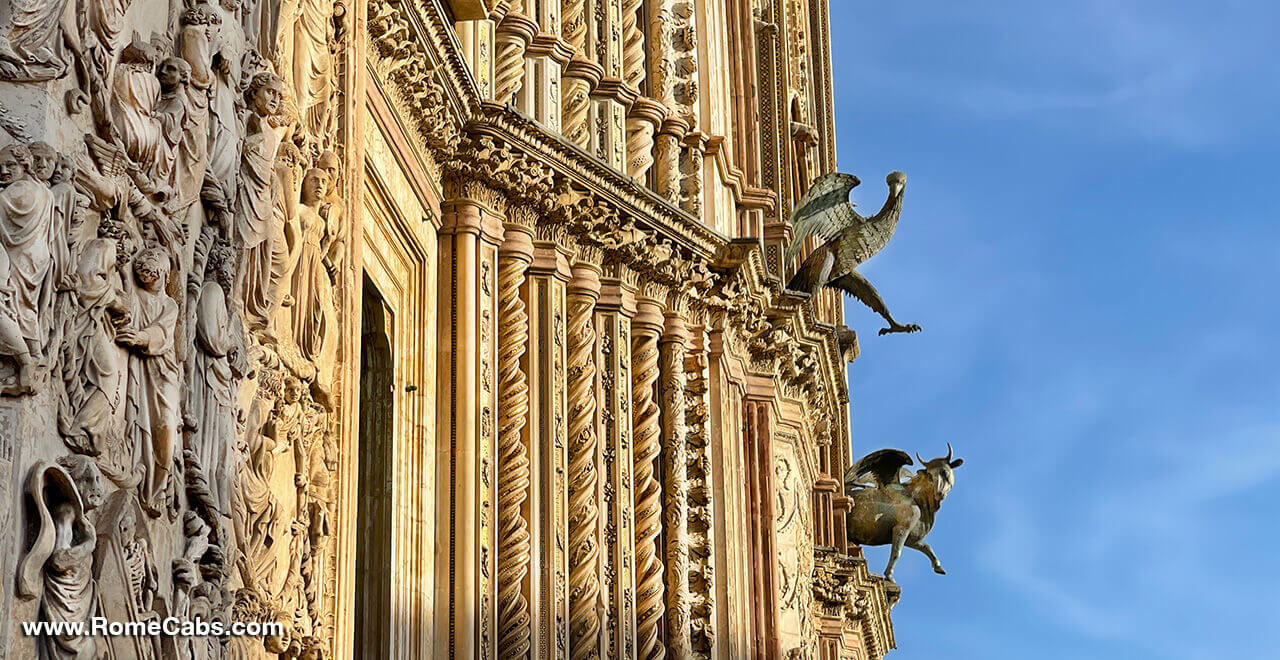 At the top of the spiers are three additional bronze (not included in photos here) statues that represent Saint Michael, Angus Dei (the Lamb of God), and an Angel.

The Mosaics on the facade of Orvieto cathedral

Above the pillars and the bronze statues shimmering mosaics add brilliance to the facade.

These mosaic scenes placed in triangular spaces were created between 1350 and 1390 following the designs by artist Cesare Nebbia. The original mosaics have been redesigned and replaced throughout the centuries, particularly in 1484, 1713, and 1842. 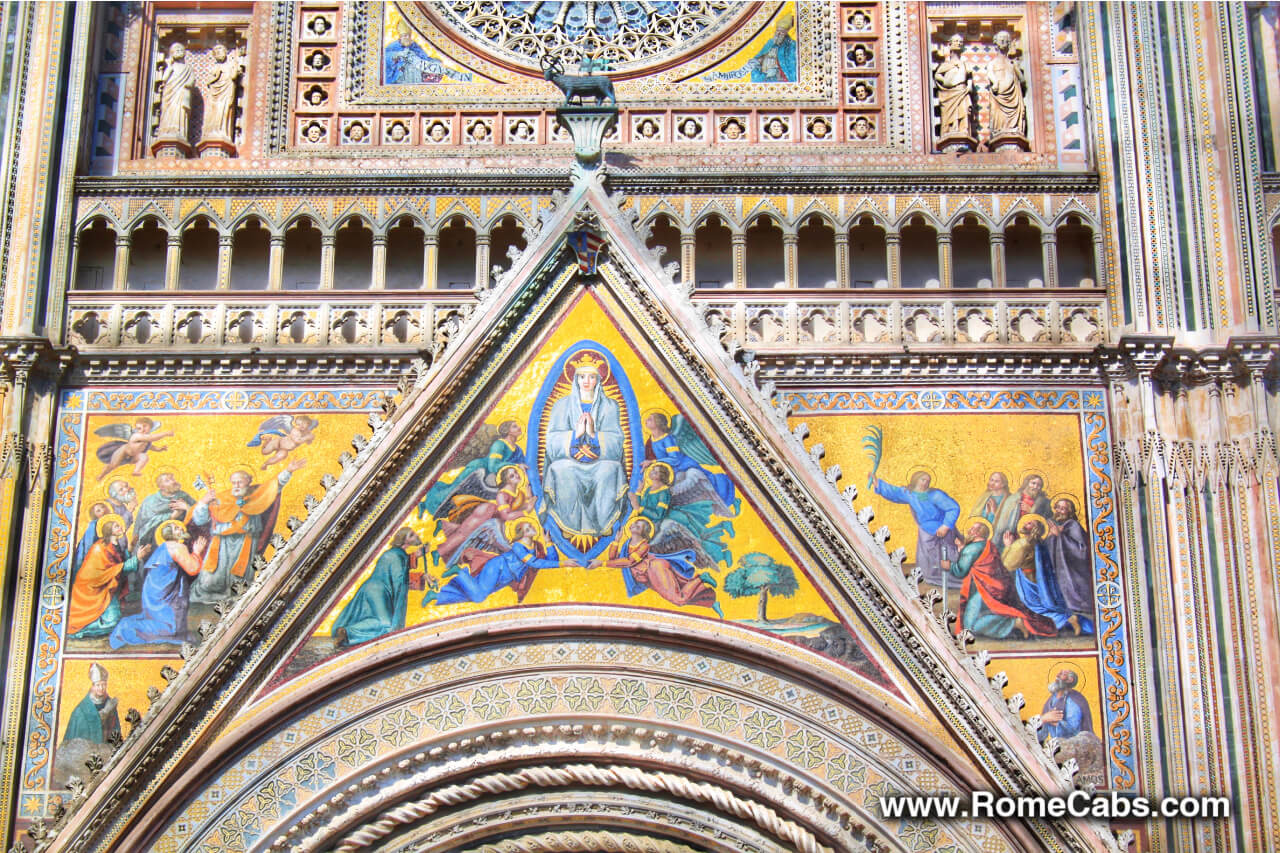 The mosaics prioritize the Virgin to whom the cathedral was dedicated, depicting scenes from the life of the Virgin, from the Nativity of Mary in the lower right gable of the facade to the Coronation of the Virgin on top of the gable.

In the segments on the sides of the gables are images of the Annunciation, the Apostles in Ecstasy for the Assumption of the Virgin, Joseph, and Anne. The upper cusps represent the Marriage of the Virgin, the Presentation of Mary in the Temple, and the Coronation of Mary.

And last but not least…

The bronze doors of the Cathedral of Orvieto

The newest part of the facade is the 3 large bronze doors that give access to the cathedral.  They were created by the Sicilian sculptor Emilio Greco. The door of the central portal depicts the Seven Works of Mercy from the life of Christ: giving a drink to the thirsty, feeding the hungry, clothing the naked, sheltering the homeless, burying the dead, visiting the imprisoned, and visiting the sick. 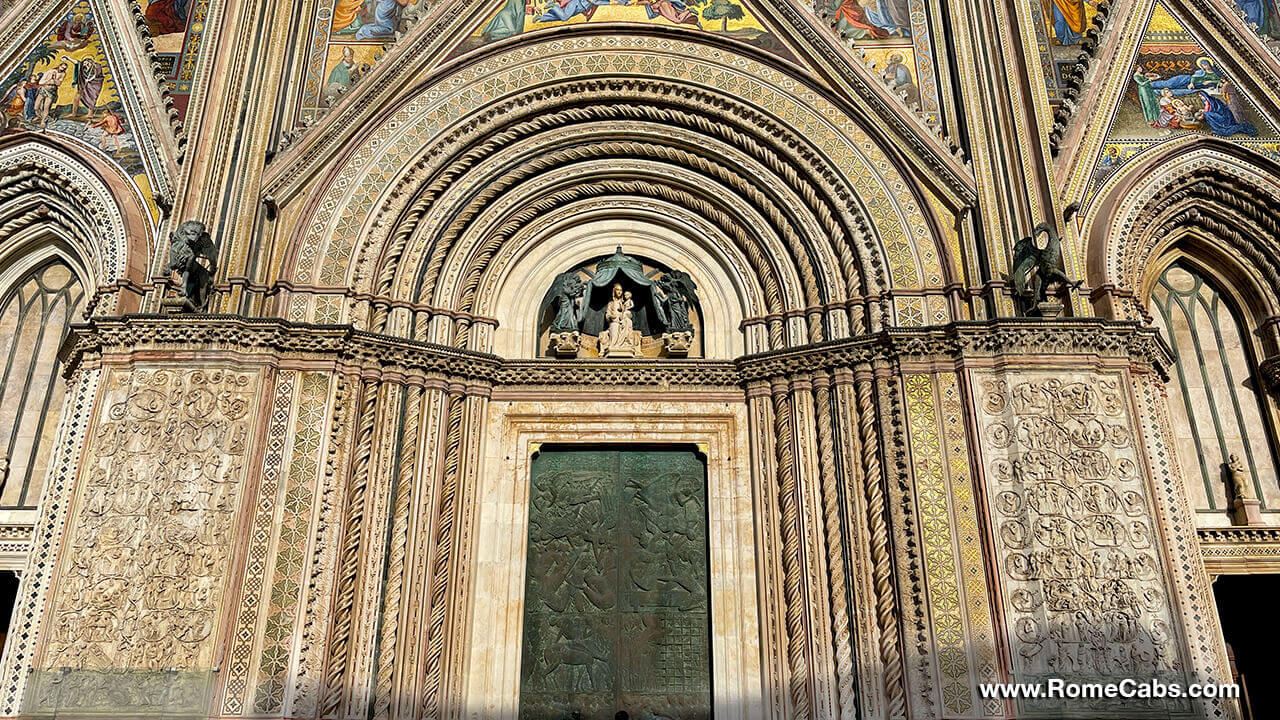 The arches of the portals feature twisted colonnettes adorned with vibrantly colored mosaics and fine motifs.  The main door is surmounted by a canopy and sculpture of the Madonna and Child created by Andrea Pisano in 1347.

Now… you may proceed and enter the cathedral and revel in its sacred interior.

We hope that next time you visit Orvieto and stand face-to-face with its magnificent cathedral, you will be better able to understand what all the intricate details signify and walk away with a much greater appreciation for this remarkable architectural and artistic masterpiece.

Thank you for reading our travel blog and for choosing Stefano’s RomeCabs for tours from Rome to Orvieto and beyond. We look forward to showing you beautiful places in Italy!

* Find us online also on: