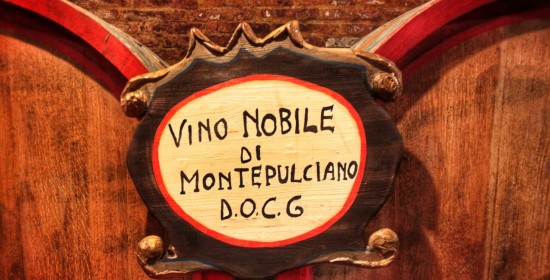 Buongiorno and welcome to Stefano’s RomeCabs, Rome’s leading company for private tours in Italy.   If you are thinking about booking a Tuscany wine tour from Rome, consider visiting Montepulciano, the elegant Tuscan town famous for its Vino Nobile di Montepulciano which reigns supreme among Tuscany’s most revered wines.

In this travel blog, we will focus on Montepulciano wine: the history and characteristics of Vino Nobile di Montepulciano to provide general knowledge and understanding of this world-class Tuscan wine. 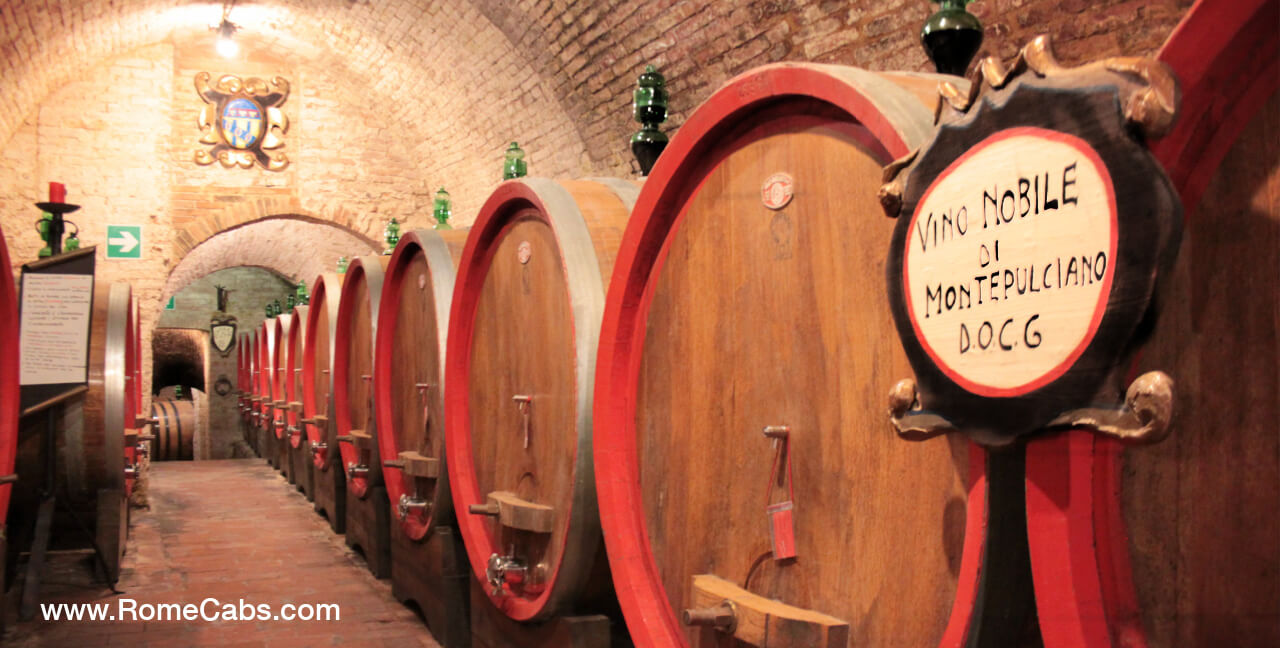 Montepulciano is a graceful medieval hilltop town in southern Tuscany about 2 hours from Rome (180 km). Surrounded by the picturesque fertile lands of Val di Chiana and Val d’Orcia, Montepulciano boasts ancient Etruscan roots with vestiges of its Medieval and Renaissance glories still evident in the town’s remarkable architecture and grand palazzi. 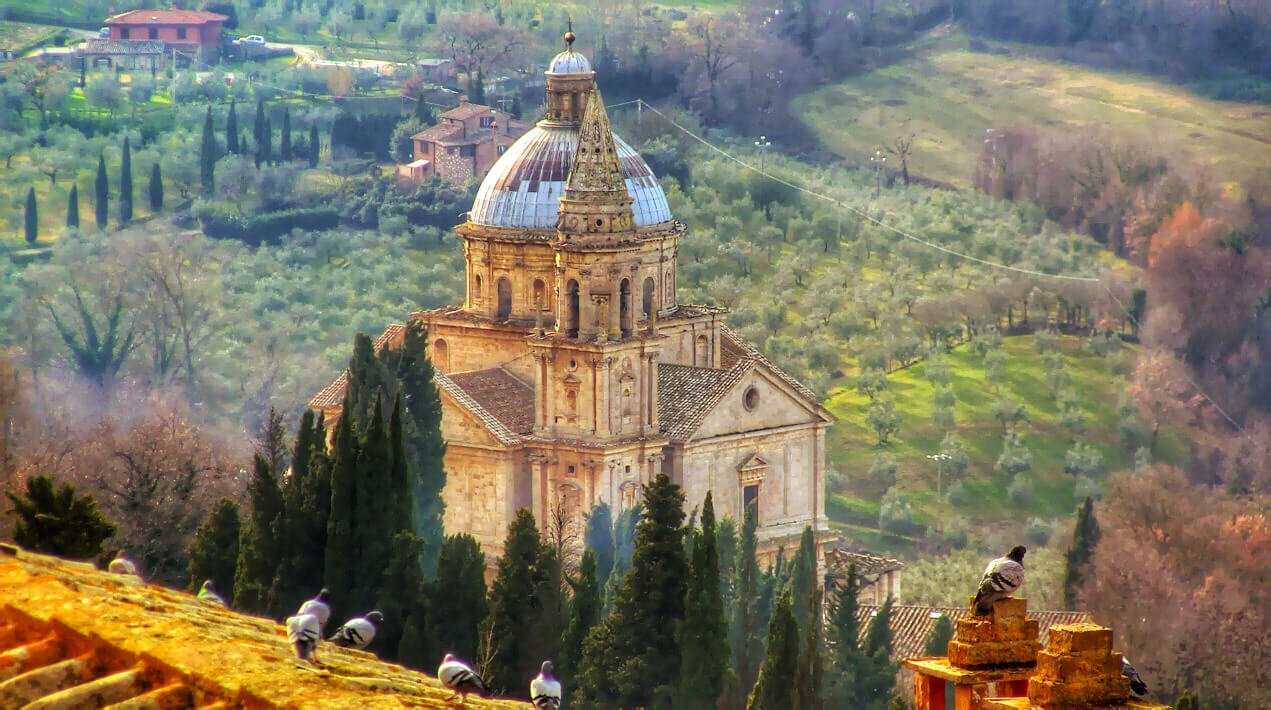 What is Vino Nobile di Montepulciano?

Vino Nobile di Montepulciano is a classic dry red wine made primarily from the local Sangiovese grape known as Prugnulo Gentile, with additional Cannaiolo and other grape varieties cultivated on the sloping hills surrounding Montepulciano which offers ideal growing conditions due to its soil composition (of alluvial origin) and mild Mediterranean climate influenced by lake Trasimeno. 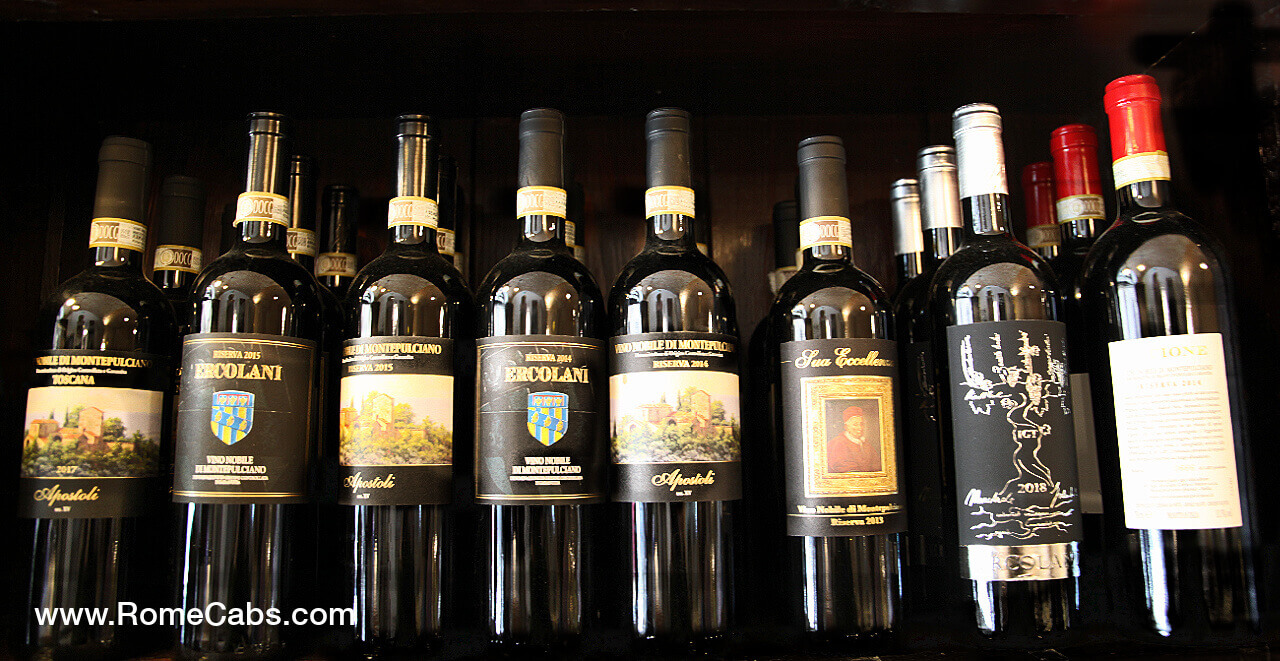 What is DOC and DOCG for Italian wines?

DOC (Denominazione di Origine Controllata) is the main tier of Italian wine classification covering almost all traditional Italian wine styles.  It represents the strong link between the wine and its territory of origin where the grapes are cultivated and the wine produced. There are approximately 330 individual DOC titles, each with a set of laws governing its viticultural zone, permitted grape varieties, and wine style. Wines that demonstrate consistently high quality are promoted to DOCG status.

DOCG (Denominazione di Origine Controllata e Garantita) identifies the highest level of protection and classification in of Italian wines. It indicated controlled (controllata) production methods and guaranteed (garantita) wine quality. Wines with the DOCG mark are subjected to stricter production rules and have much more restrictive production regulations than those with the DOC mark.  The DOCG denominations are often identified with small territories, such as valleys, hills, and municipalities such as Vino Nobile di Montepulciano DOCG.

The history of Vino Nobile di Montepulciano starts with the primary grape out of which it’s made: the Sangiovese, the red varietal indigenous to Italy. 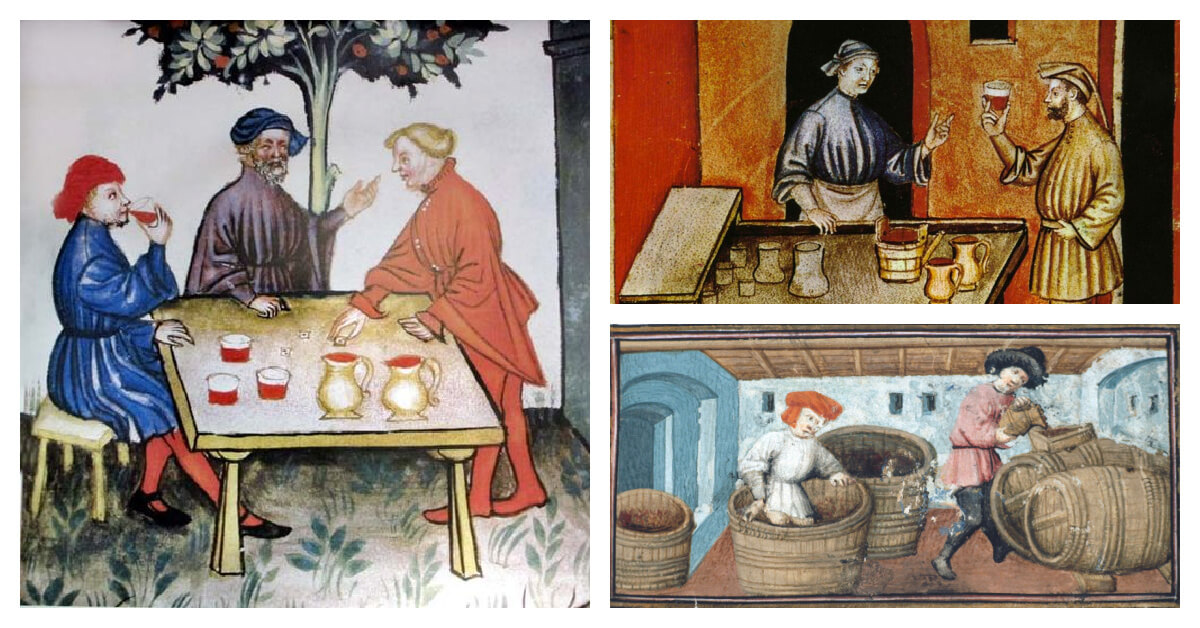 Winemaking has been prevalent in Montepulciano since the 8th century, thus the original blend for Nobile wines contains primarily Sangiovese grapes, with Cannaiolo (and other local varieties) making up the rest. The production of Nobile wines has always been synonymous with excellence and characteristics fit for a noble wine drinker which included nobles, popes, and royalty.

During the early 1500s Pope Paul III Farnese sommelier (“bottigliere”) Sante Lancerio praised the quality of the wine as “Perfectissimo" (super perfect) wine for the tables of the Lords. Tradition holds that the wine’s historic name is in reference to it being fit for nobility.

By the late 1600s poet, Francesco Redi wrote an ode to Count Federico Veterani exalting the qualities of his win, hailing Montepulciano as “King of All Wines”. 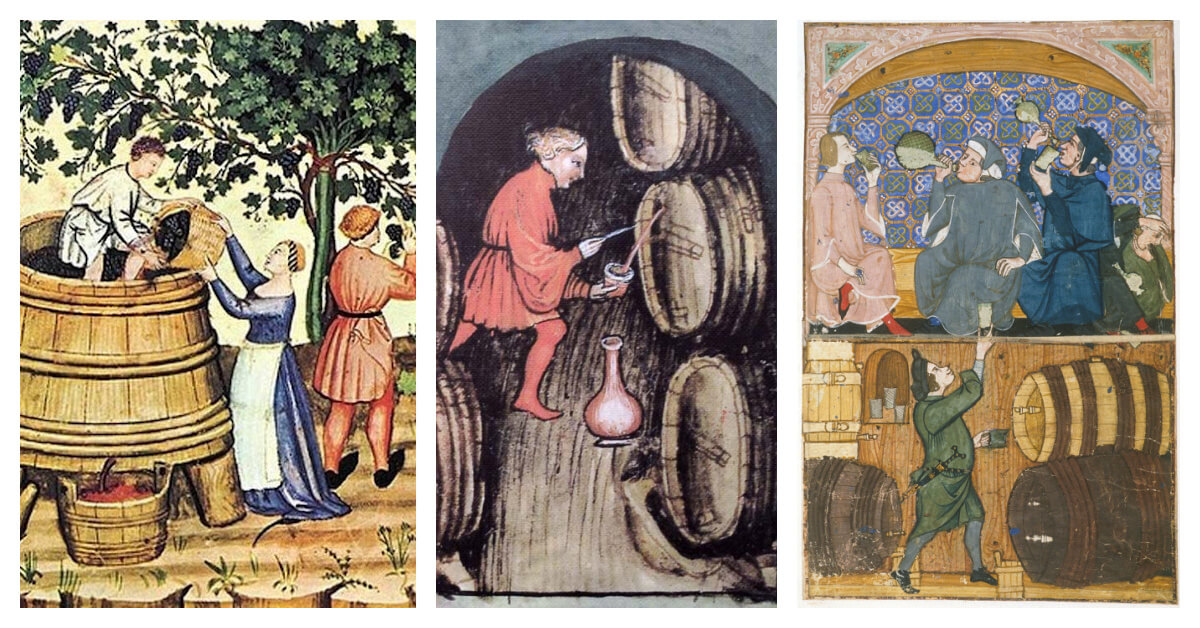 Not only poets celebrated Vino Nobile di Montepulciano, but also influential Italian Kings, Lords, Popes, and even early American presidents such as Thomas Jefferson, a wine expert, who stated: “For the present I confine myself to the physical want of some good Montepulciano…this being a very favorite wine and habit having rendered the light and high flavored wines of a necessary of life with me. It was most superlatively good.”  If the wine is fit for popes and presidents, it’s certainly fit for us!

The adjective nobile (noble) was first noted in an accounting report written by Giovan Filippo Neri, the Governor of “Regio Ritiro di San Girolamo” in 1787 where he described the wine as nobile.

Nobile was an enormous success, especially after its appearance at the first wine trade show in Siena the following year when friend and admirer of Adamo Fantetti, Tancredi Biondi-Santi, prophetically declared: "This wine will have a future. Fanetti must be considered the first producer of Vino Nobile di Montepulciano." Cantine Fanetti has promoted Vino Nobile di Montepulciano internationally following WWI and WWII.

How is Vino Nobile di Montepulciano made?

For how long does Vino Nobile di Montepulciano age?

First, the  Nobile di Montepulciano goes through a fermentation process with maceration of the skins for approximately 10 to 15 days in controlled temperatures.

Then, in accordance with DOCG regulations, Vino Nobile ages for a minimum of  2 years (3 years for riserva)  after January 1 following harvest, of which 12 months are in oak barrels. The long aging period gives the wine balance and roundness, and more prestigious wine producers may choose to age the wine for longer.

The shelf life of Vino Nobile is 4-7 years. However, some vintages can benefit from aging even 10 years or more to enhance the wine’s fruit flavors and earthy aroma.

What are the characteristics of Vino Nobile di Montepulciano?

While sommeliers can describe Vino Nobile di Montepulciano in many creative ways, however, it can be simply described as a dry, smooth, ruby red wine, that is medium-bodied with tannic textures and balanced with a cleansing of high acidity. There is a notable bouquet of cherry, strawberry, plum, and dark berries, with subtle floral notes of rose and violet and hints of spice, white pepper, vanilla, cinnamon, and earth.

This means that Nobile is easy to drink and easy to pair with a variety of foods. While much Nobile is consumed within a few years of bottling, some of the finest examples can be aged for up to 20 years! Regardless, an oak aging period of one year is required by DOCG regulations for all Vino Nobile di Montepulciano.

Vegetables that go well with Nobile wines include but are not limited to potatoes, rice (risotto), eggplant, beans, mushrooms, and grilled vegetables.

Vino Nobile does not pair well with light dishes such as fish and various seafood.